A Thousand Words Tell a Picture 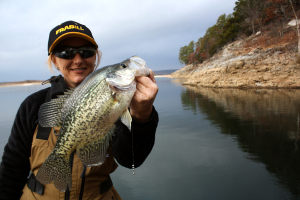 What do you see when you look at this photo? The lake—the idyllic reflection of the cliff line formed on the tranquil surface? Natural sunlight warming the rocks and eliciting their true color—the iridescent colors adorning this picture-perfect black crappie? Can you see the fluid path we took across the lake that morning? How about the patience necessary to wait for that one bite, or later, the clouds to break providing the illumination crucial to do the scenery justice?

Behind every photograph lie 1,000 words and ceaseless minutes of preparation and waiting—yes, waiting. In fact, in the world of professional photography, we often find ourselves in a paradoxical “hurry up and wait” mode, whereby photo subjects are beckoned to be on set and available at a moment’s notice, but often nearly nod off awaiting their final summons to the business end of the camera.

In Arkansas, on this brisk Lake Norfork morning the air was still but with a nip; the skies were low and grey and sunshine shrouded with the exception of brief bursts between billows – those sun-filled gaps would prove priceless in the end.

We left the docks of Handcove Resort at daybreak navigating calm water through foggy coves protected in premium FXE Stormsuit raingear and toting a wardrobe the likes of a runway model.

Just about any sizable fish would do in the big picture, but we had our minds set on a trophy crappie. Obstacles blocked our bringing that special speckled fish boatside, though, first and foremost being that our guide, Larry Olsen is an oracle to the lake but specializes in bass of all stripes, but not panfish. However, without a hint of intimidation, he embraced the challenge knowing that brushy crappie hideaways sprouted along his premium bass fishing milk runs.

Larry took us to one of his money spots, a cove that kicks out largemouth and spotted bass like a vending machine. The submerged secret to the spot was that sunken brush zigzagged the cove’s midsection, in deeper water—30 to 35 feet—beyond the rugged banks he classically strafes for bass.

So we rigged up with what crappie gear was onboard, and it was sparse at best, again, Larry licks his chops for bass not crappies. Fortunately, we brought along a couple of panfish-weight St. Croix Rods with matched Daiwa Reels.

Larry rummaged up a few smaller plain hooks. We found a couple of slip-bobbers rolling around in camera bags, and thought far enough ahead to procure a couple dozen small minnows on the drive from Blue Lady Resort around Norfork to Handcove Resort.

Larry trolled, pulling us gingerly across the brushpiles while floats held flashy minnows atop the wooded structure. Not long into the campaign he clearly identified, via sonar, fish holding tight to the tops of a brushpile. We quickly adjusted the depth of our baits to hang tauntingly above the fish. If they were in fact crappies, which commonly feed upwards, we’d be in business. Zing! We had our first beautiful Norfork crappie in the livewell. Fists clenched, we did that knuckle banging celebration that has replaced the now outdated high-five. So we were successful, and hip, at least for the moment.

Morning surrendered to midday and what had ascended into a productive crappie expedition stalled. It was time to go high-tech, because we knew the fish hadn’t gone and left the lake, just become moodier, perhaps physically relocated altogether. So down went the MarCum underwater camera to sneak peeks into untapped brushpiles.

Voila! Not long after peering through the sunken latticework of virgin timber, did our camera lens meet numbers of crappies, which were curiously, yet cautiously sizing up this manmade intruder.

We reloaded with minnows and floats figuring with fish in our crosshairs, it was now a matter of recreating the morning mission. Not 15-minutes into the crusade, though, did we recognize that spunky minnows weren’t going to trip any triggers. Fish were there, as visually evidenced, but “the bite” was not.

Scratching heads and scheming, we remembered that somewhere deep in an inside pocket was a package of plastic magic, Northland Tackle’s Bro’s Bloodworms. Innocuous and earthy toned in appearance, to crappies, which feed on both things barely identifiable by the naked eye and creepy creatures that crawl amongst the wet wood, the Bloodworms had the appeal of snacks that are eaten on impulse not because of hunger. Bam! The catching got back underway.

Larry’s livewell now harbored a half dozen truly trophy crappies, the smaller fish released immediately. So we jetted toward another probable producer when what sounded like angels singing in the distance blended with a parting of the clouds. It was show time. We had our sacred natural light.

Like a Coast Guard vessel on patrol when a distress signal hits the airwaves, Larry swung hard portside and pointed us toward the nearest sunlit and out of the wind cove.

We took the beachhead, unloading camera gear, fish, and the wardrobe in unison as if this team had trained for months. But in truth, it was our first experience as a single-celled organism. And at the risk of sounding overconfident, we were seamless…

Crappies were bucketed and positioned for quick access. Wardrobes, actually logo-wear, was donned, backup apparel kept within arm’s reach. Cameras clicked. The fish and fish-holders turned and contorted per the photographer bellowing instructions. Backgrounds rotated. Larry raised a whopper black crappie followed by a white. Like a pro, he, too, manipulated the fish and his body to capture the immaculate meshing of fish, man, and scenery.

Hundreds of frames later, bar none, this photo won the Grand Slam and Triple Crown for composition, color, and its ability to capture 1,000 words in a single frame.

Note: To really dig into the wealth of fishing opportunities Arkansas has to offer, visit www.fishing-arkansas.com, where The Natural State is broken down by region, fish species, and bodies of water, Lake Norfork included.