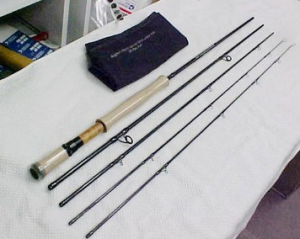 As most of you know, I’ve followed the product development and growth of John Kuehn’s Anglers Roost over the last decade or so. What a remarkable story; without doubt, it certainly warrants the thanks and appreciation of fly fishers who have other financial concerns such as family, food, housing, healthcare costs, and taxes. Best described as an obstinate bull-headed old fart, John is known to his clients and friends for his integrity, honesty, kindness, warmth, sincerity, and love. He is a remarkable man.

Those who really know me, consider me an obstinate bull-headed old fart, too. Unfortunately, I lack John’s genius for business. When I think of Angler’s Roost, I think of fly fishing products – rods, reels, lines, etc. – all of proven quality and priced to the fly fisher far below the idiotic prices being asked in today’s flaky economy and guided by the philosophy, “Let’s get what we can and run”. (Let me share with you a secret: I find it difficult to believe any graphite rod is worth $700 to $1000 dollars regardless of how much money you have in your pocket.)

For 2013, John has introduced a new series of fly rods, 22 in number — 11 single-handed models and 11 models of the spey variety. This new UHM series is made from UHM12 (Ultra High Modulus 12 graphite). And from what I’ve seen thus far, John has hit a 5-Star home run. Simply stated, these rods are spectacular and with price points hundreds less than $1,000 bucks. John is also adding yet another reel to his inventory. It’s called the Princess. Details follow; for now, accept my word … the reel is beautifully made and comp[arable to reels costing hundreds of dollars more…

But first, the rods…

The UHM term is not just new to the Angler’s Roost, it’s the new, “Hi-Tech” title for top-end graphite rods maxing out near the thousand buck mark. (Just think: a few years ago a thousand bucks bought you a damned fine bamboo rod.) This is one of the reasons I have so much respect for John; and yet, one man crusades are supposed to have ended years ago. Yep, he’s quite the guy. Here we are talking about a new rod with a new fabrication, the UHM series, that uses basically the same general formula of ingredients to build the blank to produce the rod that is every bit as great a performer as rods priced hundreds of dollars more.

Take my test rod for example. I selected a 7 1/2 foot, 3-piece, 2-weight as my trial balloon. It turned out to be a great choice. It is beautiful – a black rod with black wraps that sparkles in the sunlight. (Silver and gold flakes are contained in the gold coat. Just wait until you see it on a bright sunny day.) The cork is the best I’ve seen in several years, the burl-wood reel seat insert is lovely and compliments the remainder of the black aluminum reel seat. The black stainless steel guides would be hard to beat at any price. Throw in a hook keeper, #00 black silk guide wraps, and alignment guides, and you have a beautiful sparkling black package that weighs in at slightly over two ounces. In my hand, the rod is a feather, yet it responds to my commands with strength and purpose.

I used one of John’s new Canadian lines for the majority of the casting tests. The rod performed so well that I jumped line weight up through WF-4F, to WF-5F, using both Cortland’s Sylk and Sci-Anglers Sharkskin. Although both lines are different in many aspects, I was surprised at their performance. Not surprisingly, Sharkskin took distance and Sylk took control and special casts.

The big deal to John’s new rods will come as a great surprise: all rods of the UHM series will include a perfectly matched tip section at no extra charge. You might want to call some of the big guys like Orvis, Sage, to check the fine print about what they plan to do for you if their mega-buck rod fails… If they suggest you need to carry a backup, I think it’s fair to say you may have a problem. (By the way, great fly rods do require an experienced fly fisher to care for them properly.)

Some of you may recall that several years ago I broke and dislocated my left (casting) shoulder. With the Lord’s help, I regained a lot more mobility than the medics forecast, but not enough to handle the Spey cast.; Big mess. Meanwhile, in the great state of Oregon, I have been fortunate to develop a treasure trove of friends; each qualified to speak with authority regarding his specialty. One of them is Steve Godshall, a gentleman I consider to be one of America’s foremost authorities on Spey rods, switch rods, lines, etc. I asked him for his help after reading the draft, he agreed. With very slight editing, his words follow. I know of no one who has greater credibility to comment and critique John’s new products.

“Good Morning Doug, The 11 2-handed ARE (Angler’s Roost) rods can be divided into 4 switch rods at 11ft., 4 compact Spey rods at 12 ft. and 3 Spey rods at 13 and 14 ft. The 2-handed rods follow in the same style and manner that you have experienced in UHM singles, extremely light, crisp & clean fly line delivery with the fastest speed of recovery imaginable. The tapers are fast and tippy and yet very fluid throughout the casting stroke. The ARE rod tapers in this new UHM material creates a massive grain window and will allow the caster to go beyond both ends of my very conservative line tables. Hope this gives you some material to work with. All The Best, Steve.”

Seems to me that in a few short words, Steve said just about all there is to say about John’s 2-handed rods; and, by the way, many thanks for the chart giving recommendations on grain weight(s) for this series of rods.

And now a few words about Princess the Princess reel: It is, to be sure, a “spring- &-pall” reel, a design that has served damn near forever and proven itself to be one of the world’s greatest reels. In fact, check the current run of Orvis catalogs for the CFO reel. Truly, the CFO is a classic. Originally developed by Hardy of England, this reel is one that should never be forgotten when the Princess comes along. As the pictures clearly show, there are few if any differences between the Orvis classic CFO III and John’s Princess. In fact, I’ve been around long enough to truthfully say that I’ve fished the CFO and never had a problem. (How old am I? Good Question. Let me simply say that up until around 2000, I still gave casting demos using a 6-foot fiberglass rod, a Pfluger Medalist 1492 fly reel and one of Fenwick’s original fly lines. I think it’s interesting to note of the many things that have come and gone in fly fishing equipment, the Pfluger is still hanging on at a cost about the same as the original.

One of the things that might bother a few fly fishers is the question as to whether or not the spring-and-pawl set up works — especially in this day of disc drags that many manufacturers would like you to believe can stop Jaws in less than a hundred feet. Since I never had one of them, I can tell you that a spring-and-pall setup won’t work either; it will, however, wear-down the fish until he surrenders. And if a single spring-and-pawl is o.k., then it follows that two are better. It is my opinion that the Princess has been built with high-quality tooling and to very close tolerances. It may sound odd, but the Princess is one of the very few reels that is almost always lying on my desktop that when in thought or boredom I reach for to ease tensions… perhaps that says a lot. Give John a call at 716-565-9838 or email him at jksanglersroost@aol.com. Better yet, visit the website at https://www.theanglersroost.com