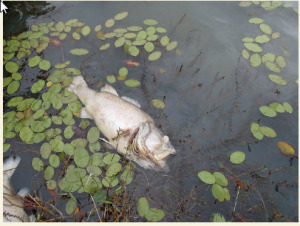 So, what happened, and could it happen to a lake near you? Unfortunately, it seems like a case of nature taking its course and, yes, it happens throughout the state each summer. In this case, it appears that heavy rainfalls flushed organic matter into the lake and the organic matter began to decompose, resulting in a low-dissolved-oxygen (DO) fish kill. As in most such cases, the die-off did not kill all of the fish, and when the water cleared and the sun came out, oxygen levels recovered and biologists observed numerous surviving fish.

This type of fish kill is pretty much a natural occurrence. They are especially prevalent in summer when a number of factors can come together to deplete the oxygen that is dissolved in the water. Fish absorb this oxygen from the water using their gills.

A healthy lake or river normally has approximately 7 to 9 parts per million (ppm) of oxygen, which is an ideal level for most fish. When the water temperature is lower, more oxygen dissolves into it. When temperatures rise, DO levels naturally drop due to reduced solubility. If the level drops below 5 ppm, many fish start showing adverse impacts, and below 2 ppm it can be lethal if it lasts very long. Some species of fish are better adapted to low DO conditions, such as bowfin or gar, but most of our freshwater sunfishes (bass, bream, and crappie) are less tolerant.

Aquatic plants produce most of the oxygen in lakes through photosynthesis, which occurs when green (chlorophyll) cells convert light into energy. However, at night or when there is inadequate light, plants use oxygen and give off carbon dioxide. Additional oxygen enters the water from the atmosphere by diffusion. In addition to fish using oxygen and plants removing it at night, a major demand on oxygen comes from decomposition of dead plant and animal tissue (organic matter).

Area residents first contacted the FWC about the fish kill in Lake Victor on April 17, after seeing dying fish floating. Fisheries biologists responded immediately and determined the DO level in much of the lake with pea-green water was 0.0 to 2.0 ppm, enough to cause the kill. Often, descriptions of lakes being pea-green relate to algal blooms, which are another insidious response to nutrients (decaying plant material, or organic fertilizers flushed from yards or crops by rain). These blooms block light to rooted plants so they do not produce as much oxygen. When algae die, they further increase the bacterial bloom.

Biologists visited daily for several weeks, documenting the number of dead fish and concluded that few adult game fish survived. However, they observed some schools of fingerling bass and bream from the spring spawn and a few bass on beds.

“We know there was over 19 inches of rain in the area from January to April, and the lake got its share of rain and runoff,” said Chris Paxton, the FWC’s freshwater fisheries administrator for northwest Florida. He said the FWC was in constant contact with the Florida Department of Health and the Department of Environmental Protection and that FWC staff accompanied investigators from the Department of Agriculture to inspect the lake during the fish kill. There was no visual evidence of chemical pollution, toxic algal blooms or signs of disease among the dead fish.

“This is something all of us, including the residents around the lake and our own fisheries management staff, wish never happened but in time the lake will recover,” Paxton said. Once oxygen levels build back up, the FWC will restock the lake with fingerling sport fish.

Bream and crappie populations can respond within one to two years but it may take three to four years for significant bass populations to rebuild. FWC biologists will monitor the lake and consider all fisheries management tools that may quicken the lake’s recovery.

The good news is there is no evidence of any form of contamination that would prevent the lake from recovering. In addition, reduced competition often allows young sport fish to grow rapidly after kills of this type.

To learn more about fish kills and what you can do to help prevent them, visit MyFWC.com/Contact. Although most summer fish kills relate to natural processes, the FWC requests your support in reporting fish kills to the FWC Fish Kill Hotline at 800-636-0511 or at the above link.

Instant licenses are available at MyFWC.com/License or by calling 888-FISH-FLORIDA (347-4356). Report violators by calling 888-404-3922, *FWC or #FWC on your cell phone, or texting to Tip@MyFWC.com. Visit MyFWC.com/Fishing and select “more news,” or scr.bi/Fish-busters for more Fish Busters’ Bulletins. To subscribe to FWC columns or to receive news releases, visit MyFWC.com/Contact.