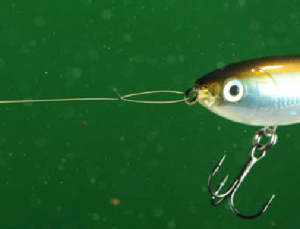 Everything about those notorious razor-toothed sportfish make them at once prized and cursed among angling explorers. Sharks, kingfish, wahoo, ‘cuda– they chew tackle to bits; jump, jolt and shake hooks loose from their jaws as easily as a Brahma bull ejects a greenhorn; they wildly roll and thrash in the line, kinking and popping leaders with the sickening ping of a snapped guitar string.

Captain Gary Anderson plies the Gulf waters around Venice, Florida, hunting everything from black tip sharks to gill rattling tarpon and menacing barracuda. But when the spring kingfish run begins, the real fun ensues. Having previously discovered the InvisaSwivel for super-stealth rigging, Anderson immediately felt confident that this new Knot2Kinky wire would be another game-changer, particularly for battling tackle-shredding kings.

“Knot2Kinky wire ties like regular fishing line,” says Captain Anderson. “Just tie a simple clinch or perfection loop knot to your hook, and you’re done. What’s amazing, though, is that much like a premium monofilament line that has stretch built in, Knot2Kinky is elastic, offering 10 to 15-percent stretch—it acts like a strong rubber band, generating more hook-ups. And when fish surge and go nuts, you’ve got a built-in shock leader that’s tooth-proof and kink resistant.”

Anderson describes his special ‘Aquateko Rig’: “We often run a live ladyfish with a 3/0 no-tie hook tethered to three feet of 25-pound test knottable Knot2Kinky wire, which is then tied to a section of 30-pound Cajun red line and an InvisaSwivel, which is the greatest concept since the wheel.”

Captain Mike Genoun, founder and editor-in-chief at Florida Sport Fishing magazine, harbors the same unbreakable confidence in the radical nickel-titanium wire. “Knot-2-Kinky is better than typical wire in every way. I’m now burning through substantially less terminal tackle, and I’m boating more quality fish, as a result. I can’t even use regular wire now. This stuff is simply better.”

“It’s a remarkable product,” says Smith. “The stuff actually stretches up to 10-percent of its length, and even more surprisingly, it bounces back to its original size and shape with no degradation in test. You do not even have to crimp this wire, you can tie it. Knot2Kinky is a unique product for those all toothy fish, and a good one at that.”

Released in 2010 InvisaSwivel and Knot2Kinky have quickly set new standards in terminal tackle design and performance. Available in sizes for all species and environments, from razor-thin 25-pound test to shark-tough 100-pound test. For more information, contact Aquateko, 140 Deer Haven Drive, Ponte Vedra Beach, FL 32082. Phone is (904) 273-7200. Or email us at sales@aquateko.com. Website is www.aquateko.com.