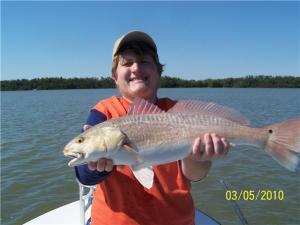 Flats are heating up in South Florida
Casting for the Cause Tournament
An over all fishing report for Flamingo and Biscayne Bay
March 18 2010
The action is South Florida continues to heat up on the flats this week, we have been finding a lot of mudding and tailing Redfish moving up on the flats to feed on shrimp and crabs in Florida Bay.

This last week we had the privilege to fish with some very nice people, and getting involved with a charity that helps people with Prader-Willi syndrome. This is a 2 day tournament helped out by some of my friends the Torbert Family of Redlands Fla… One day in Florida Bay and the next spent in Biscayne Bay. I fished with Roury Peaton and Gavin Ayers, both suffer with the syndrome but both are very good fisherman!
We started our day fishing a cold morning in the creeks and landed some smaller Redfish and Black Drum and the fishing was kind of slow. So we decided to move to the flats to see what was happening. One flat was loaded with tailing and mudding Black Drum, we threw a live shrimp in front and watched him suck it up, and then Roury landed a 25 inch Drum on the flats! We probably could have had a lot more but we needed a “nice” Red in the boat. So we moved to another flat and found plenty of mudding fish, and Gavin got a 23 inch Red to eat a Berkley Gulp shrimp. Nice job guys! The next day was breezy and cold (again!) with low visibility, we got skunked with Bones Permit and Tarpon but did manage to catch some nice Snapper and saw some monster Snook in some of the creeks we fished. We had some friends catch some smaller Tarpon around 37 inches in the morning!
There are bones Oceanside but anyone who wants good action I am recommending Florida Bay until more Bonefish show up. Also the Permit of March will be here fining and tailing all over the flats here on the next calm warm days we have so if your in Miami and looking for a quick get away it is something to think about!