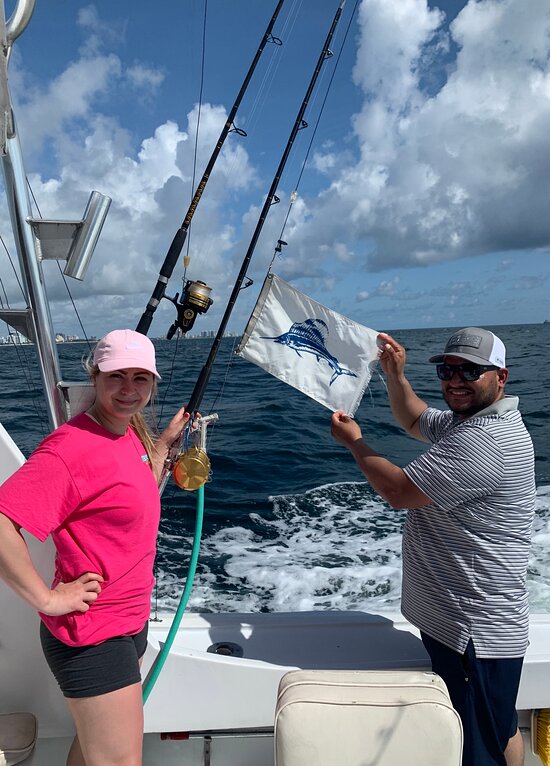 On September 15th Trinidad and Christina booked a morning fishing charter with the Top Shot Sportfishing team on the Happy Day Today. We had nice fishing conditions off Fort Lauderdale with easterly winds with a light north current and no weeds. I emphasize no weeds because, when the weeds are too thick, it can be nearly impossible to fish some areas.

We started out the morning trolling the reef with a spread of surface Ballyhoo baits with two deep planner lines. We had some early action on the trip with catching King Mackerel and Bonita on the deep planner with sea witch lures. We have had good success with King Mackerel during our summer and fall months – they are migrating through the area. Additionally, we are catching Mahi Mahi and Sailfish.

Our September Sailfish bites have been good, and we have been catching a handful each week. In prior years, both September and October have proven to have a good push of Sailfish coming through the Fort Lauderdale fishing area. We call some of these Sailfish residential fish that feed in and around the reef and wreck structures. They will stay in the area while other groups of Sailfish are passing through.

After trolling the reef and heading “up the line” or to the north towards good wreck structures, we found an area with a rip current. We also found flying fish in the area and marked them on the depth sounder. Trolling the area back and forth, a Sailfish came ripping into the spread and crashed on one of the Ballyhoo baits. Trinidad was the angler and started fighting the Sailfish. After an epic battle of jumping and running, the angler got the Sailfish alongside the boat, and our first mate safely released the fish unharmed. We practice catch and release with all bill fish species.

It was now time to head back to the Bahia Mar marina, ending another great day fishing on board the Happy Day Today with the Top Shot Sportfishing team. For a successful and adventurous deep-sea fishing charter in Fort Lauderdale FL for Sailfish, Shark, Bonito, Mackerel, Swordfish, Snapper, Wahoo, Tuna, Mahi Mahi and Grouper, contact Captain Zsak. – 954-439-8106 or email us at captdz@gmail.com Website: www.topshotfishing.com.