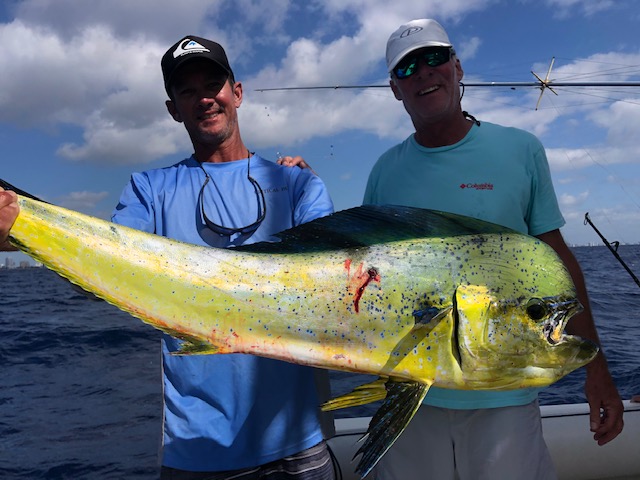 We started the morning with nice weather, easterly winds, clear blue skies, and some scattered weeds.   The group drove over from the west coast of Florida to fish out of Fort Lauderdale as we have deep waters only a few miles offshore.  On average, in 20 minutes from leaving the marina, we will be fishing in 300 feet of water.  They were wanting a fun day on the water catching fish with some to take home to eat, which is what we set out to accomplish.

I started out the morning with a trolling spread of a few deep planner lines and four surface lures and Ballyhoo.  I had lines in the water at 100 feet and started working out to deeper water.  As soon as we passed over the drop off, we had the planner line pop up and line started ripping off the reel.  It was a big first bite for the day, and the anglers started reeling in the line.  After a good fight, the guys brought in a 15 lb. Tuna. The first mate gaffed the Tuna and put it in the fish box.  Lines went back in the water, and I concentrated in this area – as the saying goes, don’t leave fish to find fish.  After a couple of turns over this drop off, we got a high line bite. This time we were fighting the fish on a TLD 25, which is a lighter set up.  We cleared out the spread of baits and started backing down on the fish.  The anglers were doing a great job fighting the fish, and as soon as the fish was up in range, the first mate reached down and gaffed another Tuna.  We were off to a good start and back to trolling the reef.  I saw a of couple birds working and, of course, headed over to them.  As soon as we got under the birds, the rigger line came down, and we had a Mahi Mahi on and jumping.  The guys fought the Mahi and into the box it went.

Next, I decided to kite fish with live bait – what better area than this to kite fish!!   We sent out two kites with two baits per kite.  I also sent out a leaded flat line, which is a bait down in the water column free swimming.  Kite fishing out of Fort Lauderdale is a very effective way to target all species.  All the tackle is out of the water and the baits are constantly splashing on the surface.

It didn’t take long before a Mahi Mahi surfaced and bee lined right for one of the live baits; the anglers fed and hooked him.  We fought the Mahi and, again, into the fish box it went.  We continued to catch another three Mahi’s live bait kite fishing.

After a great day fishing out of Fort Lauderdale aboard the charter boat Happy Day Today, it was time to head back to the marina.  Give me a call to book your deep-sea fishing charter.  If you’re looking for big game fishing action or fish to put on the grill, we have it all covered.