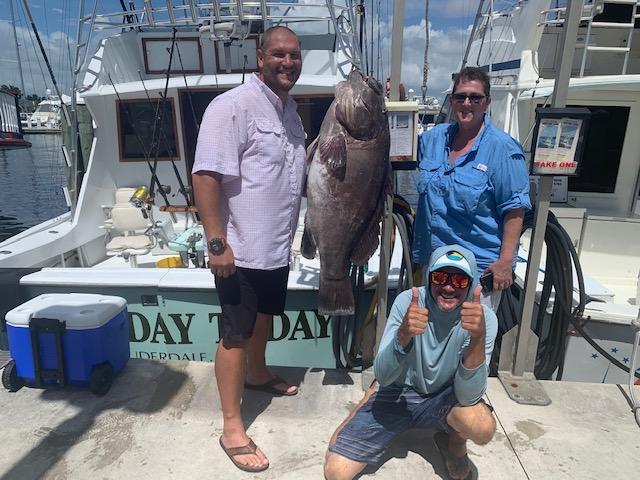 We left our dock located at the Bahia Mar Marina in Fort Lauderdale, FL with locals, Michael and Francis.  We had nice conditions with light easterly winds, north current and a few feet chop.

As we headed to the sea buoy, which is located a mile and a half from the Fort Lauderdale inlet, we put out ultra-light rods and reels with a chum bag in the water.  It didn’t take long before a school of Blue Runners showed up at the back of the boat. The steady shaking of the bag drives the Runners into a crazy fish frenzy. We caught the Runners, put them into the live well, then headed off to one of our local wrecks. Whenever fishing a wreck, it’s always good to fish with live and dead bait. Sometimes one works better than the other, but usually the live bait wins, and it’s hard to beat. The wreck we were fishing over was a sunken ship, and it’s been a great fishing structure for over 50 years.  When fish migrate through the area, they will, undoubtedly, stop at the wreck.

Positioning the boat up current of the tallest part of the structure, we rigged up one of the live Runners with a circle hook and a 20 foot leader, checking the drag to make sure it’s enough to pull the fish away from the wreck, but not too much to where the hook pulls out of the fishes mouth.  We sent the bait to the bottom, then reeled the line up 30 to 40 feet off the bottom.  By doing this, it gets the bait close to the wreck but not too close to where the rig will hang up on the wreck.   As we started drifting over the wreck, the rod bent over, and we had a huge bite.   The angler was Mike, and he started fighting this nice one. Drag was coming off the reel, and he would gain some back, as this fish was fighting hard.  The battle continued with some gain and loss.  We knew it was a nice one when the rod was tweaked over almost as far as it could bend.  Mike did a great job fighting the fish.  As Mike reeled in the fish, we could see the fish “color” – it was a big Grouper.  The first mate wired up the last 20 feet of the leader and gaffed the Warsaw Grouper.  There is no closed season for Warsaw Groupers and no size limits – each vessel is allowed one a day.

As we continued wreck fishing, I saw a bunch of Tunas jumping out of the water and popping on the surface around the wreck.  We put out the trolling gear with two deep planner lines and four surface baits.   As soon as we had lines in the water, I started marking schools of Tuna.  We made turns around the area and started hooking Tunas.  Whenever you’re in a school of fish, stay there making wider turns, narrowing down where you’re getting the best bites.  Mike and Francis took turns on the deep planner lines, reeling in fish, and we ended up catching 8 Tunas and a few Bonitas.

It was time to head back to the dock in Fort Lauderdale with a box full of fish and happy anglers. For a successful and adventurous deep-sea fishing charter in Fort Lauderdale FL for Sailfish, Shark, Bonito, Mackerel, Swordfish, Snapper, Wahoo, Tuna, Mahi Mahi and Grouper, contact Captain Zsak. – 954-439-8106 or email us at captdz@gmail.com