SEAGUAR: Lighten Up for Bass 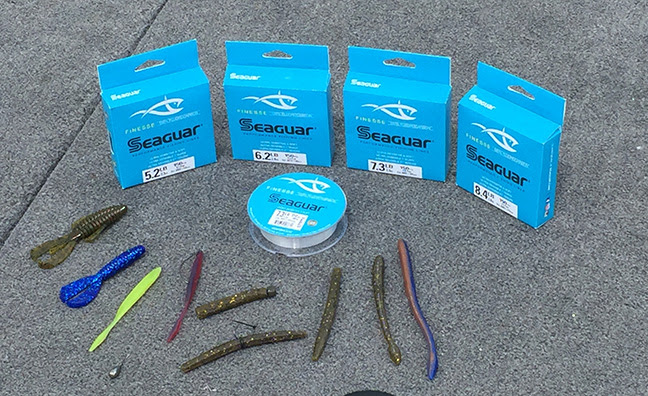 Finesse Fishing: Lighten Up for Bass

Legendary bass pro Shaw Grigsby talks the why, how, and when of finesse bass techniques

Louisville, KY (July 25, 2019) – Bass fishing isn’t always easy. Weather conditions like cold fronts and high-pressure systems, as well as probing the same waters as lots of other anglers can make fishing tough. But there are ways to up your odds in these and other difficult conditions. One of the best? Finesse fishing – fishing smaller baits on lighter line with a more deliberate and slower approach.

When it comes to finesse fishing, one of the greatest finesse bass anglers on the scene – legendary bass pro and tournament angler, Shaw Grigsby – has a wealth of critical information to share that can boost your game on the waters you fish. 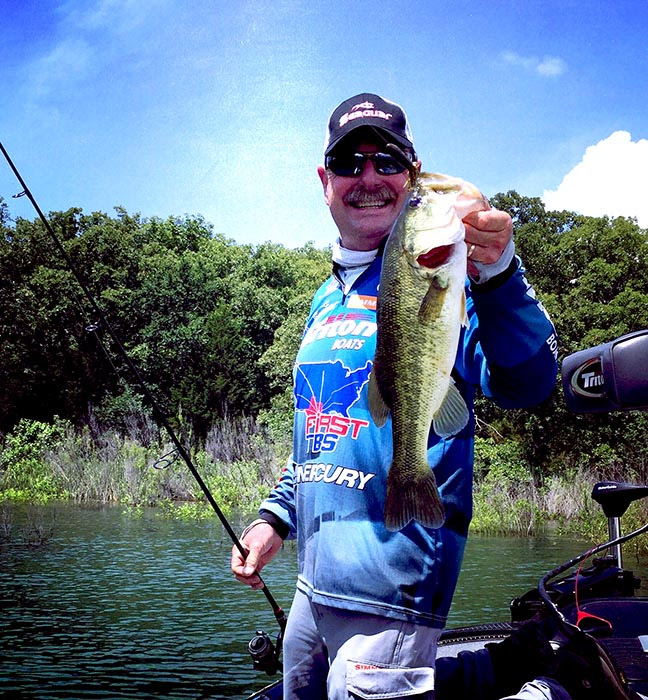 “One of my favorite fishing techniques is finesse fishing – smaller baits, lighter line, a lot of fish and loads of fun! Why finesse fishing? There are so many times that big baits are just too big for the fish,” Grigsby says. “Bass see them but they just don’t want them; they see the lure too well or the conditions are difficult, like cold fronts, high blue skies, or a lot of people around you fishing, and you just can’t catch them. So downsizing and going finesse can be the key. Just lay your bait out there and kind of jiggle it and really, what it does is all these smaller baits make it look like what’s natural for the bass to eat in their environment.”

In terms of specific techniques, some of Grigsby’s favorite presentations are drop-shot rigs, shakey head worms, wacky worms, tubes, and the legendary Ned Rig, all of which he typically presents in natural colors like green pumpkin and watermelon red.

“And when you present these techniques to them, it appears so real and it’s so small that they don’t have an issue with it,” Grigsby continues. “A lot of times a big bait may appear too bulky – and maybe you’ll catch a giant fish using a big bait at times – but when you get clear water and difficult conditions, then it’s pretty much time to downsize and go finesse. And I’ve caught giants on finesse tactics. Finesse techniques catch as many big fish as they do small and average-size ones.”
Grigsby keeps a half dozen spinning rods rigged up with finesse presentation in his boat at all times. He’s a fan of medium-light power, fast-action Skeet Reese Signature Series spinning rods, typically in the 7’3” range, and Skeet Reese size-30 Victory Pro Wright McGill spinning reels, which he favors for their large spools. 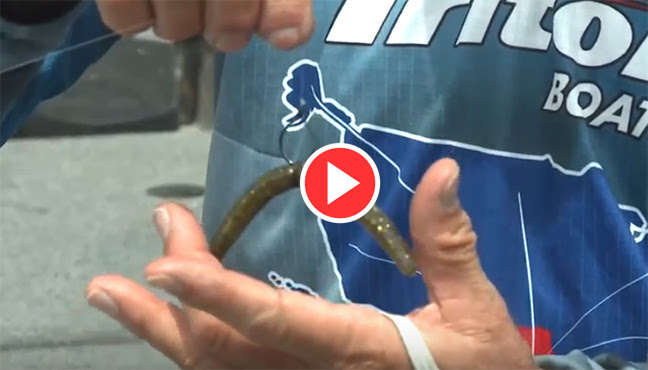 The linchpin to the system, though, is his choice in line. He spools his with Seaguar FINESSE Fluorocarbon, a line designed specifically for finesse bass fishing applications. “It’s really delicate yet strong stuff that excels for all my finesse fishing,” he offers. “I wouldn’t think of using anything else. And compared to other 8-pound line, Seaguar’s 8.4-pound is remarkably thin, supple, and strong, it’s typically my first choice in every finesse fishing application.”

Seaguar has a host of FINESSE 100% fluorocarbon lines for every finesse-fishing situation including 5.2-pound, 6.2-pound, 7.3-pound, and 8.4-pound sizes. These are double-structure fluorocarbon lines, which is an exclusive and superior Seaguar line technology that combines two different resins into one line. The high-density interior resin improves tensile strength and sensitivity while the softer exterior resin enhances knot strength. That means great sensitivity, knot strength, and the strength to handle any big fish you hook while remaining super supple.

“When you’re dealing with spinning tackle, that’s what counts – having a nice supple line that still has the hook-setting power and the strength to hold them,” Grigsby emphasizes. “Because when you’re finesse fishing you never know when that next hookset could be an 8-, 9-, or 10-pound bass. It could be the biggest fish of your life because they’re suckers for those little baits. So that’s why I always carry specific technique rods and reels and use line designed specifically for finesse fishing.” 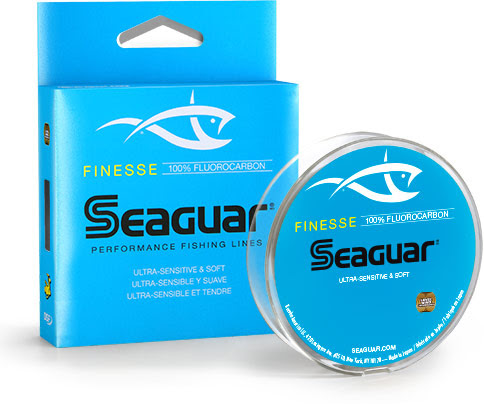 One of Grigsby’s favorite finesse techniques is fishing a drop-shot rig, which essentially consists of a small plastic bait suspended above a short length of line terminated at the bottom with a weight. “With the drop-shot, you can literally float your baits above bottom and really catch ‘em,” he says. “For most of my drop-shot set-ups I’m using Seaguar 7.3- or 8.4-pound 100% FINESSE Fluorocarbon, which holds up really well and the fish can’t see, whether I’m fishing in clear, open water or around a lot of cover.”

That brings up another point Grigsby is adamant about, and that’s not limiting finesse fishing tactics to clear waters. “You might find flooded areas with a lot of cover where the instinct is to pound with a jig, but finesse tactics – even in heavy cover – can really produce,” Grigsby advises. “Don’t overlook finesse even though you’ve got a lot of cover. It’s simple – hook ‘em, play ‘em, and get them out. Always concentrate on getting the strike, don’t worry about landing them. Landing them generally happens.”

Grigsby is a big fan of fishing wacky worm rigs in heavy cover, typically a 5-inch Strike King Ocho on a Trokar hook with weed guard on Seaguar 7.3- or 8.4-pound 100% FINESSE Fluorocarbon line. “When you throw something really light like a wacky worm into heavy cover on a finesse rig, it can really produce. A lot of times you can catch ‘em when other methods fail to produce.”

Lastly, Grigsby also carries a rod or two in his boat for Ned Rig fishing, a finesse technique that has earned an almost magical reputation across the country. 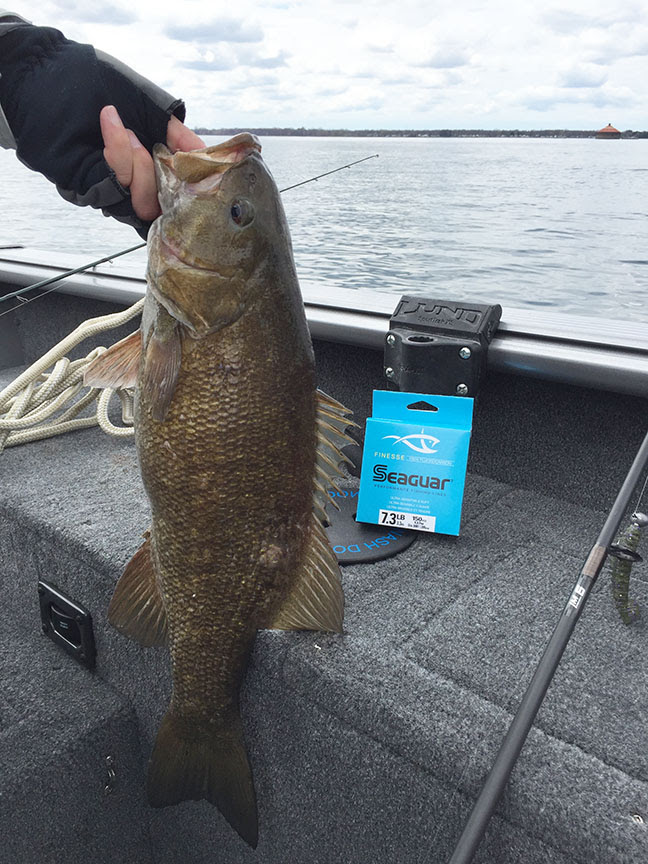 “The Ned Rig has really come along to be one of the main finesse baits to just catch ‘em,” says Grigsby. “It’s awesome. I got introduced to it about three or four years ago with its flat head – like you took an Aspirin and put a hook in it – and using something like an Ocho worm that you cut in half. I didn’t have any of the right jigheads so I just took the Ochos I had, cut them in half, and started fishing them on a regular 3/16-oz. shakey head and just caught the fire out of the fish!” he recalls. “But once you get a Ned jighead and it stands up so perfectly it works even better. Something I found out that’s really interesting is that when you discover the bass are eating this little bait, a Ned worm also works wonders on a Trokar nose hook fished as a drop shot. I started fishing it on a drop shot and the fish I caught was ridiculous. So, I now combine the two techniques quite a bit.”

No matter where you fish bass, going finesse can definitely up your odds for more and bigger fish when the going gets tough. Take a few tips from legendary bass pro and finesse expert, Shaw Grigsby, and we promise you’ll put more bass in the boat, too.