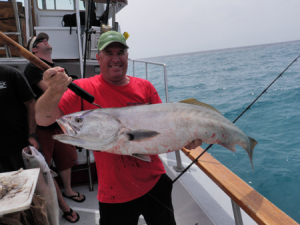 Right at daybreak on December 15th last year I lost a monster white seabass just beyond gaff range as the fish violently shook its head and chewed through brand new 30# monofilament. “I told you to quit using that #%&@ -ing mono,” was the first thing out of the mouth of my friend, Captain Wes Flesch, as he put the gaff back in its holder and gave me a deflated look. The crewmembers aboard Options are extremely competitive, fishing fanatics and losing big croakers is not something that goes over well. Obviously, charter clients get more slack than the boat owner when things like that happen – but I deserved it because I am supposed to know better!

Wes and I have had an ongoing dialogue about seabass gear for well over a year now. Captain Flesch’s light rig for WSB is a beefy ten foot stick with enough backbone to put the heavy pressure that is appropriate to the 50# braided line and 40# fluorocarbon leader that lines the reel. Many anglers do not fish with this type of set-up because frankly they are very expensive and require slightly more sophisticated knot techniques for the wind-on connection from the braided main line to short fluorocarbon leader. I have been one of those guys who begrudgingly stuck to monofilament, and still will, but not for island white seabass fishing anymore. That big beautiful winter fish that went away last December converted me permanently.

I think the main reason that I have hung on to light tackle was my first white seabass that came in the mid 90’s. That gift of a fish weighed 33 pounds and was caught on a pea shooter of a rod that was straight tied to 8# tournament line on a dinky reel. If that fish had not been perfectly hooked in the corner of the mouth and the boat was fishing in the mud, away from structure, I would have lost that fight which lasted an hour and twenty minutes in the dark.

Ninety-nine out of a hundred times that fish would be lost due to a variety of circumstances. Often time good seabass bites can be highly localized; i.e. a certain depth/fathom curve that the fish are congregating, a temperature break or an area holding a lot of squid. When this scenario unfolds during the late spring it can turn into a parking lot even at San Clemente Island. People have no mercy and even conscientious anglers will anchor right on top of the boat next to them in a hot seabass bite. This is where the right gear, a good angler and a top notch crew will make the difference in landing that big fish in a crowded zone. Besides this as we all know the number of seals along the coast, and at the local islands, are on an upswing. These marine mammals love nothing more than to prey on hooked game fish, especially at the latter stages of the fight. Pay attention to what is going on and fight the fish accordingly.

In asking myself, what I could have done different to land the one that got away I have to look at what typically happens in a seabass fight. While the bite can very from a slight tap to a line ripping run, once you are hooked up seabass will take off laterally. Most of this is because of fishing the shallow water zone they inhabit, anywhere from five feet on a shallow beach to 120 feet over a squid nest, does not allow them to dive deep. A lot of times when you hook up and the fish starts pulling line and heading away from the island to deeper water it ends up being a bat ray. Nevertheless you have to fight them hard and get a visual identification on what is at the end of your line, because you never know.

Often on this initial run the anchor chain get involved as they head out to sea. Most hook ups on Options occur in the stern which is usually facing the island and/or a kelp line. The fish goes toward the bow and as does the angler and helpful crew member. This is where it can get dicey but with good communication, calm nerves and some anchor line acrobatics you can keep the fish on the line. The crew member and angler will have to lie down on each side of the pulpit and make the right decisions to free the wrapped line. Once this is accomplished and the angler keeps steady pressure and regains some line the fish can usually be brought alongside the boat. This is where things are likely to go wrong again. A lot of times you get the fish close at deep color, they see the boat and then take off again. This is where I screwed up royally! I did not increase my drag pressure but I kept heavy pressure on when I should have either slightly backed off the drag or dipped the tip in the water and “…let the fish have it’s head,” according to Captain Flesch.

Effective island seabass fishing requires a longer rod, beneficial from a casting standpoint but also when you consider the physics involved as the fish gets closer to the boat. Besides the anchor chain you have the boat hull and associated running gear to take into consideration. As with offshore fishing and its challenges it helps to keep a crew member nearby with a watchful eye to subvert potential challenges. When they tell you to dip the tip in the water and get around the corner to clear the shafts/props – listen and act accordingly.

“Back off the drag a notch and give them their head,” Wes told me later after the prolonged fight and delayed heartbreak set in from what would have been my largest WSB of the season. Not to slight the healthy 35 pound fish I caught on a lead head up tight at Whale Rock last June, but catching a large model winter fish when nobody is at the island is different. What Wes really meant with his statement was control yourself and think logically while all hell is breaking loose. Seabass get very erratic at the end of the fight, changing directions and typically having vigorous head shakes. This is where having the abrasion resistant fluorocarbon makes a difference.

Every scenario though is different, feel the fish and make adjustments to yourself and tackle when necessary and above all communicate with the crew and the other anglers to minimize angling tragedies. As the angler you are the quarterback, be proactive and anticipate what the fish is going to do. This can be the difference between a “…one that got away story” versus an awesome picture, a couple of nice stones and a big bag of fillets.