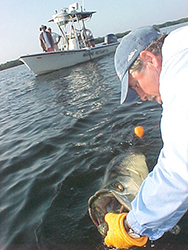 The Florida Fish and Wildlife Conservation Commission’s (FWC) Fish and Wildlife Research Institute (FWRI) has been using DNA fingerprinting of tarpon for several years now. Genetic samples are collected by recreational anglers (including guides) and returned to FWRI for processing. These samples are used to determine recapture rates, health, migration, and movements of individual fish. These factors are evaluated overtime on recaptured fish. The biologists at the FWRI, in partnership with Mote Marine Laboratory, use the data to assess the success of tarpon stocks and the connectivity of, or relationship between, tarpon and different bodies of Florida waters.

In 2009 Capt. Dave Markett issued a challenge to sample collectors for the months of May and June. He challenged samplers to beat him during that two month period. If anyone beat him he pledged to personally deliver a bottle of the winner’s favorite spirits.

From that beginning, the challenge has been operative each year since and will expand in 2012 to become a joint Florida Guides Association/Florida Fish and Wildlife Conservation Commission event. The event will be promoted as The FGA/FWC Spirit of Tarpon DNA Sampling Challenge. The name recognizes the spirit of tarpon in the fight and the spirit of the volunteers willing to help improve the science.

The challenge will be promoted to encourage more anglers to participate in the Tarpon Genetic Recapture Study. It is a win-win situation with FWRI getting the samples and the anglers getting recognition for their tarpon catching skills. The project also notifies anglers if they catch a previously sampled fish.

The FGA/FWC challenge is issued to all interested recreational anglers for the months of January through December. Each angler’s location will be determined by county of residence. A calendar year is easy to track and gives everyone a full year and each local season to fish. The winners will be determined by the number of DNA samples taken during the stated time frame. (January 1st to December 31st 2012)

Final Samples must be received at FWRI by January 15th following the year of competition.

Winners will be announced as soon as FWRI has time to tally them (February 1st is the goal).

See the information below on how to obtain your free sampling kits.

Prizes: The prizes for each category are outlined below. This is a work in progress and details will be released as the competition unfolds. Be assured, there are going to be some very nice prizes.

Grand Champion
The angler submitting the most samples will be awarded a fishing trip for two with an FGA Guide, to be selected by the winner, and a certificate signed by the president of the Florida Guides Association and the Chairperson of the FWC or the Executive Director of the FWC at the time of the award. A Grand Champion trophy will be housed at FWRI with each winner’s name engraved on the perpetual trophy.(Note: Current FGA guides will be asked to participate in the Grand Champion prize promotion. Those that volunteer to participate will be added to a list from which the winner will select the guide he/she wishes to fish with. The guide must remain current with FGA. The participating guide will be reimbursed in the amount of $500 for conducting the trip. The participating guide will also be eligible to have a link for their business placed on the Mote Marine Laboratory Corporate Sponsor list for the year following the award.)West Coast Champion
Excluding the Grand Champion if applicable, the West Coast angler submitting the most samples will be awarded a prize package consisting of products marketed by participating FGA business members. The West Coast will be defined as the Alabama/Florida state line to the Collier/Monroe County line with Monroe County being the entire Florida Keys.

East Coast Champion
Excluding the Grand Champion if applicable, the East Coast angler submitting the most samples will be awarded a prize package consisting of products marketed by participating FGA business members. The East Coast will be defined as the Florida/Georgia state line to the Miami-Dade/Monroe County line with Monroe County being the entire Florida Keys.

Florida Keys Champion
Excluding the Grand Champion if applicable, the Florida Keys angler submitting the most samples will be awarded a prize package consisting of products marketed by participating FGA business members. The Florida Keys will include the Everglades and is considered all of Monroe County.Bonus AwardsFGA Guide Members: If the Grand Champion is a current FGA Guide in good standing he/she will be awarded next year’s FGA membership for free.

FGA Associate Members: If the Grand Champion is a current Associate FGA Member in good standing he/she will be awarded next year’s FGA membership for free.

Get a Free Sampling Kit
Anglers who would like to assist the study can obtain a free, easy-to-use tarpon DNA sampling kit by emailing TarponGenetics@MyFWC.com or by calling 800-367-4461.

View a how to video on sampling
A new video provides a step-by-step look at how an angler takes a tarpon DNA sample for the study. The video, produced by Florida Sea Grant and the University of Florida Institute of Food and Agricultural Sciences Communications, can be viewed at www.YouTube.com/user/MyFWCsocial.