FWC carries on the Public Trust–Doctrine 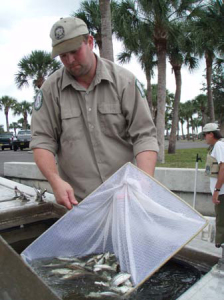 For my 32 years with the Florida Fish and Wildlife Conservation Commission (FWC), I have been one of those folks dealing with the stigma of “I’m from the government, and I’m here to help you.”

Fortunately, the FWC has an outstanding public reputation, and most people who care about nature and are outdoors enjoying our resources
understand that we really are here to provide a service. FWC employees, whether biologists, conservation officers or those holding a myriad of specialized jobs, are ultimately here to see that we
manage fish and wildlife resources for their long- term well-being and the benefit of people.

Long ago, resource users and all those who benefit by having healthy fish and wildlife and beautiful natural areas to appreciate, conveyed on governments the task of protecting and sustaining nature. In previous “Fish Buster’s Bulletins” and our “Florida Freshwater Fishing Regulations Summary” (MyFWC.com), we have discussed how the North American Model of Wildlife Conservation helps to fund. Fish stocking is just one of the more easily recognized ways by which FWC helps anglers and preserves the public trust and regulate fish and wildlife harvest and use to ensure safe and sustainable public recreational opportunities. That model incorporates the “Public Trust Doctrine,” so perhaps it is time to explain its history and relevance.

The Public Trust Doctrine is part of common law, and each state customizes it to establish public rights in navigable waters and along shores. This is because people used these common areas for food, travel and commerce since time immemorial. Many historians attribute the origins to Roman laws passed around 529 A.D. that stated, “By the law of nature these things are common to all mankind – the air, running water, the sea, and consequently the shores of the sea. No one, therefore, is forbidden to approach the seashore, provided that he respects habitations, monuments, and the buildings, which are not, like the sea, subject only to the law of nations.” Roman property systems specified not only private property but also common property (res communis) and classified wildlife under the law of things owned by no one (res nullius).

By high school, everyone should have heard of the Magna Carta, which in 1215 established that although the Crown (British royalty) continued to own property, commoners had the right to use tidal areas for traditional uses. Although the Crown was a trustee of these lands, it could not provide exclusive rights to submerged lands.The American judicial system incorporated these common-law practices early in the nation’s history. In 1842, Chief Justice Roger Taney ruled in Martin vs. Wadell that “shores, and rivers, and bays, and arms of the sea, and the lands under them (were held) as a public trust for the benefit of the whole community, to be freely used by all for navigation and fishery.”

The Public Trust Doctrine has continued with three solid core principles. First, that fish and wildlife are public resources. Second, they are managed for the common good. Third, trained professionals hold them in custodianship and serve as trustees who are accountable to the public.

In Florida, the state constitution sets out the Public Trust Doctrine in Article X, section 11. This constitutional provision codifies existing common law, ensuring that title to navigable lakes and streams is held by the state in trust for use by the people. As applied in Florida, the doctrine protects water bodies that were navigable at the time of statehood in 1845. In 1909, the Florida Supreme Court interpreted this to mean “navigable for useful purposes common to the public in the locality where the waterbody is located.”

The term “navigable for useful purposes” must be understood in context of the transportation system that actually existed at
the time of statehood. In 1845, the only railroad in Florida was between Tallahassee and St. Marks. It used wooden rails with
carts pulled by mules. As a result, lakes and streams were by far the most reliable public highways for moving goods and people.
Consequently, the Florida congress recognized the status of these.

In 1845, the map of Florida looked much different, but waters used for commerce then are still public waters.
Data collected by scientists trough electrofishing and tagging studies helps ensure quality, sustainable fishing opportunities.
waterways when it declared that all the “navigable rivers and waters in the districts of East and West Florida shall be, and forever remain, public highways.”

In the mid-1800s, steamboats, barges, flat-bottom boats, dugout canoes and homemade skiffs were used to transport passengers, products and produce, so Florida became titleholder of all such navigable water bodies within its boundaries when the territory attained its statehood. Title “passed to the state in its sovereign capacity to be held by it in trust for the people thereof.”
Building on this, in 1937, President Franklin D. Roosevelt signed the Federal Aid in Wildlife Restoration Act. This act has been key to implementing the North American Model of Wildlife Conservation. Since 1941, sport-fishing businesses have paid a federal excise that went into the general treasury of the United States but did not directly benefit manufacturers or anglers. In 1950, sportsmen and businesses teamed with conservation-minded policymakers to redirect these existing federal excise taxes to the Sport Fish Restoration Program (aka: SFR, Dingell-Johnson or Wallop-Breaux). As of 2012, the Federal Aid in Wildlife Restoration Act and the North American Model of Wildlife Conservation will have
been working for 75 years.

The concept was to restore sportfish populations and improve public access, so, more people can enjoy fishing and fishing sales would increase. Sport Fish
Restoration came about because anglers wanted to see more money directed toward Fishing licenses and excise taxes on tackle fund sport fish restoration and conservation activities throughout Florida.
restoring the nation’s recreational fisheries, ensuring better fishing opportunities for themselves and future generations. It has been the best thing for anglers since mass production of fishing reels.

Today, SFR uses a small excise tax on fishing reels and other fishing tackle, as well as a motorboat fuel tax, to fund sport-fish restoration and boating access programs. It is working. There are now at least 77 percent more anglers than in 1950. Purchases of tax-related items by anglers have increased by nearly 200 percent in constant dollars since 1955.
Anglers and fishing businesses want to know the benefits they receive in return. To help answer this, Andrew Loftus Consulting and Southwick Associates analyzed data on excise taxes invested, fishing participation, and angler purchases of excise-tax related products for a 2011 report to the Association of Fish and Wildlife Agencies. The report found that excise-tax related return-on-investment ranged from 1,585 percent in 1970 to 2,643 percent in 1980.
In Florida alone, SFR provided $13 million in 2010, of which 15 percent ($2 million) went to boating access. Freshwater fisheries conservation received $5.5 million (the rest went to saltwater fisheries). In freshwater, the FWC uses this money to improve fisheries habitat, stock fish, conduct research and manage fish populations. We also conduct aquatic education programs and provide valuable fishing and conservation tips to anglers.
The bottom line is that the public trust doctrine, the North American Model of Wildlife Conservation, your fishing license fees and Federal Aid in Sport Fish
Restoration work hand-in-hand with anglers and other folks who are concerned about our natural resources to ensure safe and sustainable use for everyone.
For me, that makes it much easier to say, “I’m from the government, and I’m here to help.”
Instant licenses are available at MyFWC.com/License or by calling 1-888-FISH-FLORIDA (347-4356). Report violators by calling *FWC or #FWC on your cell, or 1888-404-3922. Visit MyFWC.com/Fishing/Updates for more Fish Busters’ columns.