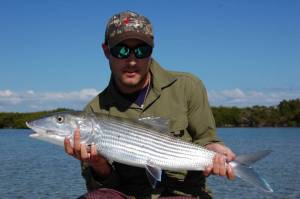 Great fishing in Florida Bay with schools of Redfish eating just about you throw at them. With the weather being extremely warm and mostly calm the fishing has been awesome.
Enrique, Jeffrey Eisenband and Pepe Hane fished Florida Bay out of Flamingo and Caught 28 Redfish sight fishing the flats in a four trip. The Largest was 12 pounds, there were 5 over 10 pounds and the rest were all over 5 pounds.

They were using Gulp jerk baits.
Loads of smaller Redfish Sheep head and small Snook are stacked up in the creeks.
Tarpon fishing continues to be off the charts with Tarpon Stacked up in the backcountry from the reports I am getting… I have been fishing Biscayne Bay for Bones the past weekend but I will be there the next 4 days so look for the next report soon.

In Biscayne Bay over the weekend Brian Fernandez and Stuart Sandefur fished for Bones with some difficult windy conditions on Friday, but on Saturday the winds let up some and Brian caught his first eleven pound bone on a live shrimp in South Biscayne Bay. There were tailers and small schools cruising the flats. His hookup came after some huge tailing bones were spotted close to the mangroves on the first part of the incoming tide. After getting up current of them he made a great cast that caught the attention of the fish which ate and ran!
There is great action in South Florida!
Best of luck
Capt. Jim Hale
www.floridasportfishingcharters.com
786-255-1788