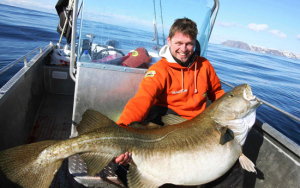 It’s been a busy month for record-seeking anglers! Almost 50 World Record applications were received at IGFA headquarters in May, and of those, these nine saltwater and four fresh water records – and an application for the new 50 lb Dolphinfish Trophy Club – stand out from the crowd. Check out the highlights from anglers catching southern bluefin tuna, great barracuda, tarpon, musky and more in Angola, Australia, Brazil, Christmas Island, Norway, Mexico, and Florida, New Jersey, Massachusetts and Michigan in the USA in this edition of the IGFA Hot Catches.

Don’t forget the cut-off date for new records to be included in the 2014 IGFA World Record Game Fishes book is just around the corner. Applications must be approved by the IGFA by October 13, 2013 and catches made within and outside of the USA cannot be approved until 60 and 90 days after the catch, respectively. Questions about a record or application? Contact World Records Coordinator Jack Vitek via jvitek@igfa.org or 954-924-4246.

On a recent trip to Baja, Mexico from his home in Idaho, USA, Capt. Gary Boyer landed a potential men’s 10 kg (20 lb) tippet class California yellowtail (Seriola lalandi) that tipped the scales at 16.33 kg (36 lb). Boyer was casting a custom sardine fly off Los Barriles on March 20th when he fed a fly to the weighty yellowtail, which gave him a tough 45 minute fight. The current IGFA record is 14.06 kg (31 lb).

While fishing off Scituate, Massachusetts with Capt. Greg Sears on May 10th, angler Dr. Jan Forszpaniak landed a potential All-Tackle Length record pollock (Pollachius virens). The Florida, USA based doctor needed seven minutes to subdue the 70 cm fish after it crushed the diamond jig he was working. After some quick photos and measurements, the fish was released alive. The current IGFA record is vacant.

Junior angler Lydia Nicolson, co-winner of last year’s Top Female Junior Angler award, shows no sign of slowing her record setting pace. The most recent submission from the UK based angler is a 36.9 kg (81 lb 15 oz) Atlantic sailfish (Istiophorus platypterus) that she caught on March 8th while trolling a skirted ballyhoo off Lobito, Angola. Using only 3 kg (6 lb) line, Nicolson needed a full hour to best this potential Female Junior record fish under the watchful eye of her father and captain, IGFA Representative Iain Nicolson. The current IGFA record is 31.2 kg (68 lb 12 oz).

Angler Wally Baines of Jacksonville, Florida, USA, was soaking a blue crab off the coast of his hometown in north Florida on May 26th when he hooked a sizeable bonnethead shark (Sphyrna tiburo) that took him 10 minutes to land. Once boated, Baines used his IGFA Official Measuring Device to determine that his catch was a potential IGFA All-Tackle Length record, taping out to 99 cm. After some quick pictures, the fish was released alive to grown even bigger. The current IGFA record is 93 cm.

Light tackle angler Maureen Klause landed a potential record black drum (Pogonias cromis) while fishing with Capt. Ricky Wheeler in the Delaware Bay on May 27th. Klause, a native of New Jersey, USA, needed 20 minutes to subdue the 28.04 kg (61 lb 13 oz) fish on only 2 kg (4 lb) line after it ate the clam she was soaking. With the current record at 18.37 kg (40 lb 8 oz), Klause’s catch qualifies her for the potential new women’s 2 kg (4 lb) line class record.

Canadian angler Christian Loranger was trolling along the sharp drop-offs surrounding Christmas Island on September 23, 2012, when his musky plug was inhaled by a massive fish that tested both his tackle and wits for nearly two hours. A 39.55 kg (87 lb 3 oz) great barracuda (Sphyraena barracuda), and potential new All-Tackle record, was the result of Loranger’s two hour battle. The current IGFA record for this toothy species stands at 38.55 kg (85 lb 0 oz).

German angler Micahel Eisele may have broken the All-Tackle world record for Atlantic cod (Gadus morhus), which has stood for more than 40 years. Eisele pulled the enormous 47.03 kg (103 lb 10 oz) specimen from the icy waters surrounding Soroya, Norway on April 28th after it decided to eat the custom soft plastic/jig-head combo he was working. After a 36 minute fight on 20 kg (40 lb) tackle, Eisele subdued the massive cod and was on his way to the scales. If approved, Eisele’s fish will replace the men’s 24 kg (50 lb) line class record as well as the All-Tackle record which has stood since 1969!

California angler Chris Wheaton will soon become the newest member of the IGFA’s new 50 lb Dolphinfish Club with a 24.4 kg (53 lb 9 oz) dorado he caught last year during the Fishin’ for the Mission tournament, based in Loreto, Baja, Mexico. Wheaton is currently arranging for the tournament scales to be re-certified so that his monster mahi will be officially recognized in the IGFA’s newest Trophy Fish Club. For more on the requirements of IGFA Slam and Trophy Clubs, visit https://www.igfa.org/Fish/IGFA-Clubs.aspx.

On a recent trip to Argentina, three members of the de Almeida family of Sao Paulo, Brazil, recorded potential record catches on beautifully colored but ill-tempered dorado (Salminus brasiliensis). On May 4th, Tacito de Almeida landed a 17.41 kg (38 lb 6 oz) fish – heavy enough to qualify for the 10 kg (20 lb) line class record which currently stands at 16.8 kg (37 lb). Then his daughter and son, Manuela and Guilherme, joined him with two potential Junior record catches the following day. Manuela’s fish weighed in at 13.52 kg (29 lb 13 oz) and Guilherme’s at 17.38 kg (38 lb 5 oz). All three potential record catches were caught in the Uruguay River on Rapala plugs with local guide Alejandro Differding and released alive after being properly documented.