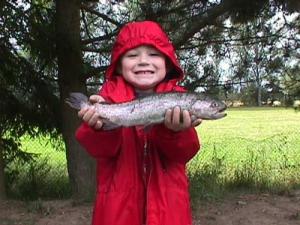 Although not native to Michigan, rainbow trout have become one of the state’s favorite sport fish. From the inland lakes and streams to the Great Lakes, rainbows provide countless hours of angling enjoyment to all manner of fishermen.
Native to the Pacific watershed, rainbow trout came to Michigan when eggs were imported from California in 1876. First stocked in the Au Sable River, then four years later in the Lake Michigan watershed, rainbows can now be found in all corners of the state. Large specimens that inhabit the Great Lakes but travel inland to spawn in streams have come to be called steelhead.

Like any trout, stream rainbows can be caught by a variety of techniques; live bait, artificial lures and flies all produce. In large lakes, rainbows can be caught by trolling or by fishing with bait or jigging through the ice in winter. Though most commonly associated with clear-water lakes in northern Michigan, rainbow trout have been successfully stocked into a number of southern Michigan lakes as well, where they provide a unique fishery. Fishing after dark at the thermocline — the depth at which there is a major change in temperature — with live bait, salmon eggs or corn is the principle technique.

When many Great Lakes area anglers think about rainbows, however, they’re dreaming of steelhead, fish that are hatched (or stocked) in a river, migrate to out to the big water to mature, then return to their natal streams to reproduce. Although there is an open-water, off-shore fishery for steelhead in the summer in Lake Michigan, the bulk of anglers pursue them during their spawning runs, from the piers or in the streams. Steelhead begin filtering upstream in October and fishing for them continues through May, though between fish that have completed spawning (popularly called “drop-backs”) but have yet to migrate back out into the big lake and a few summer-run fish, there are almost always some steelhead in the streams.

Anglers can catch steelhead with a wide variety of techniques. They are often taken on spawn, either loose eggs tied in bags or whole skein cut into chunks, fished on the bottom or below a bobber. But other fishermen enjoy casting for them with spinners and plugs and still others, fishing from boats, simply drop crankbaits downstream and allow them to work in the current. Fly fishermen using nymphs or egg patterns fish along the bottom, though swinging large streamers in the current is catching on in popularity.

Michigan is one of the best steelhead fishing states in the country. Virtually all Great Lake tributaries attract some steelhead with some of the best-known fisheries at the Manistee, Pere Marquette and St. Joseph Rivers in the Lake Michigan watershed, the Au Sable River off of Lake Huron and the Huron River in the Lake Erie watershed.