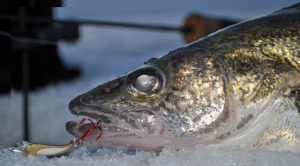 President Reagan was in office. Post-punk new wave and ‘hair bands’ dominated the charts. And freshwater fishing was in the midst of a renaissance. Contemporary, realistic lures trail-blazed the way, along with sonar, technical fishing lines, composite rods and structure fishing. Right there on frontlines, leading the ice fishing brigade, was Custom Jigs & Spins. And now, more than three decades later, the visionary tackle makers continue that heritage while simultaneously developing new lures that your sons and daughters will fish for years to come.

Traditions Media president Noel Vick still talks about his first and still most reliable ice fishing lures. “To this day, I can open the door to my garage and expect to see a few baits glowing. Those would be Demons and Rat Finkees; ones, quite literally, I’ve had since my teens.” The Rat Finkee and Demon were introduced by Custom Jigs & Spins in the late 70s. And not many seasons later, were some of the first lures on the market to sport phosphorescent glow paint.

Speaking of the paint job, it’s a hallmark that still stands as testimony to the craft. “Lures like the Rat Finkee and Demon are hand brushed five times before we add the final clear coat,” says Custom Jigs & Spins president Bob Gillispie. He also verifies that every eye is paint-free for quick tying.

Those are time-consuming but oh-so rewarding processes when you can catch hundreds of fish on a single jig and it still looks new from the package.

“Quality is definitely number one,” says Gillispie with absolute pride in his team’s manufacturing process. “If you build good stuff and sell it for a fair price, good things will happen.” And they do. Just ask the anglers.

This approach to product development has spawned such current offerings as the now iconic Ratso, Shrimpo, Gill Pill, Diamond Jig and wildly popular Slender Spoon. And with ice fishing explorer Walt Matan – who once owned the company – still tinkering in the workshop and testing on the water, anglers can expect more firsts and future legacy lures from Custom Jigs & Spins.

Beyond their bedrock lineup of ice fishing jigs, Custom Jigs & Spins also touts a few other brands, each owning a lineage of longevity. The original Flu-Flu panfish jig, for one, staked a claim for hair jigs and to this day bests all competitors in quality. Worm Factory is an assortment of pre-rigged soft plastic worms that have been catching fish for over 30 years. And four years ago, Gillispie acquired B FISH N Tackle, a softbait, jig and bladebait brand well known throughout the walleye world.

As ice fishing approaches, it’s primetime to hail the maker of many of the originals. You can trust they’ll catch fish; weather winter well; and be raring to go next season if a rogue pike doesn’t force you into a replacement first.