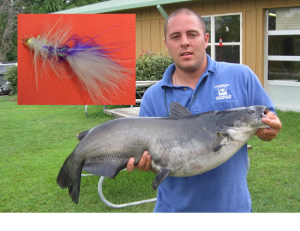 When Bryan Smith of Athens isn’t helping visitors to the Texas Freshwater Fisheries Center (TFFC) catch fish, he does some fishing on his own.

On Friday, May 24, the TFFC volunteer took advantage of some free time to do a little fly-fishing.

“Fly-fishing is my passion, and nothing could have been greater than what happened that day,” Smith said. What happened was a new state record for heaviest channel catfish caught on a fly rod. The fish weighed 20.8 pounds and was 35.5 inches long.

After being photographed, the fish was released back into the TFFC casting pond, qualifying it for both state and TFFC catch-and-release records. The fish is also the new TFFC casting pond water body record. Plus it was Smith’s fourth Big Fish Award of the five needed to earn him Elite Angler status.

“I was very excited to have caught this fish. I’m an avid fly-fisherman and am trying to achieve my Elite Angler Award using only my fly rods,” Smith said. “This fish marked a stepping stone in reaching my goal. I hope this experience can show other anglers that fly-fishing can be used to take fish that most people wouldn’t believe you could ever catch on a fly rod.”

“While learning to fly-fish I have developed a special way to detect and catch catfish on a fly-rod which is very unusual,” Smith said. “I use a method known to some fly-fishers as a dead drift. It involves a strike indicator or a shorter leader/tippet using the fly line as the indicator, which I was doing the day I caught the record fish. The way I catch my catfish on the fly is, I allow the fly to sink to the strike zone. Catfish feed a lot on falling prey, particularly minnows and shad from schooling fish such as white bass and largemouth bass. Sometimes these schooling fish will eat so much they will begin to regurgitate their prey, and it falls. As it falls catfish and other fish will pick it up, and that is what I re-create.”

Smith caught his record fish shortly after 9:00 a.m. on his first or second cast. “I saw the fly line jump and immediately set the hook with a fast strip,” he recalled. “The fly probably hadn’t sunk 12 inches when the catfish picked it up. Once I set the hook the catfish swirled and began digging down. I adjusted my drag knowing I had just hooked into a great catfish! He immediately began running and was attempting to go into deeper water. I tightened my drag more to create the most resistance I could.” Smith battled the fish for about 20 minutes before it tired and allowed him to land it.