NOAA Monitoring Changes in the Ecosystem 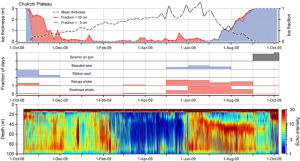 In recent years, NOAA scientists have deployed a series of underwater listening devices in the Arctic. They are using these devices to listen for whale calls, but they are interested in much more than just the whales themselves. With the new acoustic technologies, NOAA scientists are using sound to closely monitor changes in the marine ecosystem.

This is especially important in the Arctic. As ice cover retreats—scientists predict ice-free Arctic summers in as few as ten to twenty years—new areas are opening up to the oil, fish, and shipping industries. But because these areas have been covered in ice for most of the year, we know relatively little about the Arctic marine ecosystem. As industries gear up to enter the Arctic, there is an urgent need to understand basic ecosystem processes so that science can guide our decision-making.

While studying the Arctic ecosystem, NOAA scientists rely on sound for the same reason that whales and dolphins do: sound travels well underwater while visible light does not. Using sound, NOAA scientists and their colleagues have already made significant discoveries about Arctic whales. Until about ten years ago, most of what we knew about these animals came from visual surveys. But because whales spend most of their lives underwater, visual surveys do not provide a complete picture of whale ecology. Acoustic surveys, on the other hand, can be conducted year-round, including during periods of darkness and bad weather. And because sound travels so well underwater, acoustic surveys cover a larger geographic range than visual surveys.

It turns out, whales occupy sub-arctic and Arctic seas for much more of the year than previously understood. For example, recorders have picked up gray whale calls in the western Beaufort Sea in the middle of winter, a time when it was thought they would all be down by Mexico or at least on their way. Similarly, scientists have recorded fin whale calls in the Bering Sea in winter when they thought these whales to be long gone. There are surprises like this nearly every time scientists deploy long-term recorders in new settings.

This realization is itself an important development in marine mammal science. But it’s really just the tip of the iceberg. “Once you overlay where marine mammals are, what they’re doing, potentially how many there are, with the habitat you’re dealing with, the oceanography, and other ecological variables out there, you start to build a comprehensive ecosystem picture,” says Sue Moore, a marine ecologist with the NOAA Fisheries Office of Science and Technology. And that’s where acoustics can really help fill some gaps in our understanding.”

The new development isn’t the use of sound itself—oceanographers have used hydrophones since before World War II when the U.S. Navy hunted enemy subs by listening for them. What is new is that the sensors have become smaller, longer-lasting, and relatively inexpensive. Different types of sensors can be deployed together, allowing scientists to not only track whales at the top of the food chain, but also to simultaneously monitor the physical forces that underlie it, such as temperature, salinity, and ice thickness. Scientists can send sensors to the bottom of the ocean where they record data for later retrieval or attach them to mooring lines where they can beam back data in real-time. They can also be deployed on sea gliders—autonomous vehicles that can be sent off on their own.

Traditionally, biologists studied marine mammals, and physical oceanographers studied the physics of the ocean. But now that scientists are integrating both physical and biological sensors into the same sensing network, some of those lines are beginning to blur. “My work is at the confluence of two disciplines,” Moore says, “getting the oceanographers to more routinely think about mammals, and getting the marine mammal researchers to more routinely think about the physical environment of the ocean.”

Science progresses when someone comes along and synthesizes ideas that had previously resided in separate disciplines. NOAA scientists are developing new technology to do just that. As a result, we have a better understanding of the biological and physical forces that are rapidly reshaping the Arctic.