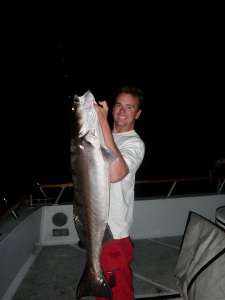 It happened the first time at night…starting as the sun set over the ocean in a dazzling display of color in the western sky. The engagement continued on for more than an hour and when it was done I finally had my cherry popped – on white seabass that is!!! That was a long time ago and I have spent many nights bobbing around on the backside of various islands and along the coast since then trying to catch seabass, but that one stays with me. It was a memorable fluke – catching a 33-pound white seabass on straight tied Ande 8# tournament green but what was also something I will never forget was that it all happened in the dark, on a sport boat that was blacked-out because the generator had blown. The deckhand followed me around with a flashlight for an hour and 21 minutes and when that glorious fish hit the deck I thought that I had scaled Mt. Everest.

Fast forward many years, many heartaches and occasional glories to the present – to the backside of one of our favorite local islands. “Yes, we own the night, uhh!” hollered Captain Wes Flesch as he sank the gaff into a large model and hoisted the forty-pound white seabass over the rail as it hit the deck with a pronounced thud. Then the slapping began; the broomed tail thumping on the deck, high fives all around and a little extra male bravado with fresh beers being cracked. This type of behavior is very common at 1:30 a.m. at cantinas throughout Southern California but this party wasn’t at a bar, it was along the backside of San Clemente Island.

“They’re on the meter…stacked up like cordwood…nothing under forty-pound test!” barked Captain Tino Valantine from the wheelhouse after being woke up by the ruckus on the deck below. “Uhhhh, fresh one!” hollered my buddy as his rod doubled over and he got lead to the bow by a hot fish. All of a sudden we had three more fish hanging. This is where things can get tricky, especially at night, and you have to stay on top of your game or the opportunity of a nighttime feeding frenzy can turn into multiple tragedies. Keeping your wits about you in stressful situations like this is tantamount but there are other things you can do to tip the scales in your favor as well.

In my opinion, the most important nighttime tool of the trade for a dedicated seabass angler is a good headlamp. There is a wide variety of manufacturers but what I think is most important is having a unit that has options for different colors of light and varying degrees of intensity. For instance, my little Browning headlamp emanates green or white light and can project a single beam or a triple beam. When you get bit and the fish rips offline heading out to sea and you are headed to the bow knowing you will have an anchor chain to deal with then you want white light and all three bulbs illuminated. This is for personal safety reasons, being able to see the angle on your line and deal with the anchor line. The deckhand following you needs a headlamp on too which is invaluable when it comes to accurate gaff placement on what could be the trophy of a lifetime.

It is important to remember that you need to adjust to each situation and environment that presents itself. If you are sitting on the back of Catalina in a parking lot scenario and you are waiting for something to happen then I would be using green light and only a single beam. Stealth is also an important consideration for nighttime fishing. No hooting and hollering when you are hooking fish in a parking lot because you are asking for unwanted neighbors. Try and make as little noise as possible, not only to prevent people from moving closer and anchoring next to you but also to keep them biting once they get started. White seabass are very skittish and hypersensitive to not only changes in water conditions but ambient noise levels; anchor chains, generators, the thud of a rod butt on the deck et cetera. I know I mentioned making a bunch of noise earlier in this piece but we were all alone and at island #2, which does not get even remotely the amount of pressure that island #1 receives. Again the key is tuning in to your environment and adjusting to the situation. This all seems like common sense but many people lose their marbles when they hook into a big white seabass.

When you are fishing on a six-pack the night driver will be up while most of the passengers and crew are in the rack. On Options, we fish a little harder than most other boats in the fleet and Captain Wes is a master of the dark. Once we get to our destination and have bait, Wes will meter around until he finds a promising structure with suitable conditions. Many boats will anchor out in deeper water and wait for daylight before moving in to the zone. They are missing out on prime time when these fish are foraging under the cover of darkness. I would say that more than 50% of our seabass this year were caught in the dark, especially the big ones. I have been woke up by Wes more than once standing over my head, holding a big seabass and screaming “they’re biting get your ass up!”

Typically we will have two baits on the bottom tied up with dropper loop rigs. The amount of weight depends on the current, anywhere from a four-ounce to eight-ounce torpedo sinker will usually suffice. We like big hooks on Options, for the dropper loop or fly line, and our favorite is a 7/0 Owner Aki Twist. And yes, you can still catch a one pound calico bass with this hook just as easy as with a #2 hook. It is all about the squid and having that bigger hook gives a substantial amount of very sharp, exposed hardware to hook your quarry. Sometimes we mix up the bottom rigs and put out a heavy white jig with 2 or 3 dead squids pinned on the single or treble hook. If I had to pick I would go with the single but the treble does work. Besides the bottom rigs that we fish off each side of the boat, we will deploy a bait in the middle of the water column. Typically this is alive or dead squid with a 3/8 ounce sliding sinker above that same big hook I was talking about for the bottom rigs. In the warmer water months, I think it is also important to have a big fat squid fly lined on the surface. Wes affectionately refers to these larger baits as “tire pumps” and some of our friends will even tie a balloon to the line which ensures that the bait stays near the surface.

For many people, white seabass are absolutely vexing. I think that we have caught 50 people the first white seabass of their life aboard Options this year. We love this as much as we love getting personal best fish for our regulars because this magic is what it is all about – our love for the ocean and passion for fishing. I talk to all of our charter masters and open party clients on the phone or in email exchanges before they get aboard. I get a lot of questions, which I gladly answer, but the most common is “whatta I gotta do to catch one of those damned things?” My answer is always the same – FISH AT NIGHT!!! Oh yeah, that first seabass I mentioned earlier…I ate the heart and slugged it down with a cold one. Keep fishing.