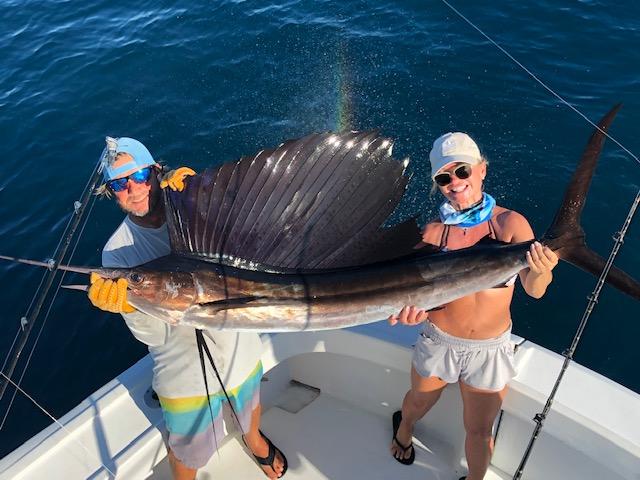 On Tuesday, September 1st, the Top Shot Sportfishing team aboard the fishing charter boat, Happy Day Today, fished a half day morning charter from 8am till noon. We had nice conditions with light easterly winds, small chop and a light north current.  We headed out of the inlet ready for some action with a group of 3 people on board, two of which had never fished before.

With having Lady Luck and first timers on our side, our initial plan was to troll to a wreck and try for an Amberjack or Grouper.  The wreck fishing has been good out of Fort Lauderdale and using live bait has been the most productive.  Since the conditions looked right, we started our morning trolling.  The first mate rigged up 4 surface swimming Ballyhoo baits and 2 deep planner sea witch baits.  The planner baits get down 50 feet with a long and short bait. The surface baits are two long and short set back along the wave formation, so that they are spread enough apart yet close enough to appear as a school of baitfish.  The reef system along the Fort Lauderdale coast runs north and south, dipping in shallow and jets out deeper.  We work this drop off from 100 feet to 300 feet of water, which produces most of our catch.

The first hit we had was on the long planner rod, which can be the most active rod on the boat. The planner tripped, and one of our anglers started reeling in the fish.  Once the planner came up, the mate removed it, wired the remaining leader and gaffed a nice 15 lb. King Mackerel.

I was working a current edge in 150 ft. of water that had blue water on the deep side and blue/green color on the inshore side. As we trolled along the rip, my high line bait brought forth a big splash behind it.  Quickly getting my attention, I reeled up on the Ballyhoo – he hit my Ballyhoo again, however, this time I saw it was a Sailfish.  Never quite getting the bait in his mouth, I tried teasing him, hoping that the Sailfish would follow my bait.  The Sailfish tried it again, but this time, we dropped back a few seconds, and reeling tight, we had him on.  The Sailfish immediately started running and jumping away from the boat.  The angler got in the chair and started fighting the Sailfish.  It took about 20 minutes of the fish running and my maneuvering the boat to stay in front of him before we had the fish alongside the boat.  The first mate reached down, removed the hook out of his mouth, and after a quick photo, we released the Sailfish back into the water.   Fishing out of Fort Lauderdale, we practice releasing Sailfish.  We briefly celebrated, then put lines back in the water.

There’s an old saying “don’t leave fish to find fish” so I continued working the area where we got the first few bites.  With lines back in the water, it didn’t take long before we hooked up two Bonitas – one from the rigger and the other from the planner.   I continued trolling from 100 out to 300 feet of water into the blue edge along the rip and back over the reef.  We ended up catching another two King Mackerel on the deep planner lines.   With the troll bite being so good, we decided not to wreck fish and continue staying in the action off Fort Lauderdale.  As we were trolling along the rip, I looked up and saw a War bird or Frigate bird circling around – this is always worth checking out.  After we passed the area, the right rigger Ballyhoo bait came down, and we had a real nice hit.  The line started ripping off the reel, and in the distance, we could see a Sailfish jumping.  Clearing all the lines out of the spread, the first mate passed the rod to one of our anglers, and they started fighting the Sailfish.  Another awesome show, with this one jumping higher than the previous Sailfish.  Pulling drag, running and jumping, the angler did a great job fighting this Sailfish.  We got the fish alongside the boat, removed the hooks, and after a quick photo, released the Sailfish back in the ocean where he quickly swam away.

It was time to head back to the Bahia Mar marina, ending another great day fishing on board the Happy Day Today with the Top Shot Sportfishing team.  For a successful and adventurous deep-sea fishing charter in Fort Lauderdale FL for Sailfish, Shark, Bonito, Mackerel, Swordfish, Snapper, Wahoo, Tuna, Mahi Mahi and Grouper, contact Captain Zsak. – 954-439-8106 or email us at captdz@gmail.com  Website: www.topshotfishing.com.