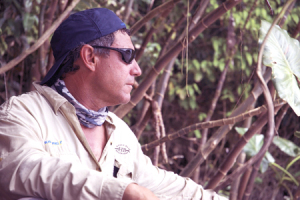 Fishing industry colleagues and
Hell’s Bay pro team remember Jose WejebePreparations underway for Celebration of Life memorial this Sunday at IGFAAs the family and friends of Capt. Jose Wejebe prepare for his Celebration of Life memorial this Sunday in South Florida, the outpouring from the boating and fishing communities continued for the popular guide, producer and TV host who was admired for his kindness and recognized for his many charitable efforts, especially in the Florida Keys.Wejebe, 54, of Summerland Key, died early Friday evening, April 6th, after his single-engine plane he was piloting, crashed shortly after takeoff in Everglades City, Fla. Weather is believed to have been a factor. He was the respected host of the long-running Spanish Fly fishing show which began in 1995 on ESPN and later on the Outdoor Channel.
Those whose lives were touched by Jose are welcome to attend The Celebration of Life, Sunday April 15th, at 1:30 p.m., at the International Game Fish Association (IGFA) Museum in Dania Beach, Fla.
Wejebe was also a valued member of the Hell’s Bay Boatworks’ world class pro team, a unique blend of flats captains, authors, producers, TV hosts and leading fly and light tackle fishing educators all who shared Jose’s love for fishing and the environment. Most were together with Jose for the last time just weeks ago meeting with anglers at the Hell’s Bay exhibit in the Miami Boat Show:
• Chico Fernandez, author, fly expert and frequent TV guest: “Jose was a fine guitarist, a top fishing guide and a great angler on all facets of the sport. Yet he was humble about his accomplishments. His gentle ways will be missed by so many of us.”
• Andy Mill, Olympian, TV host, tarpon fishing champion, author: “Words can’t describe the enormity of the fishing world’s loss with the passing of Jose. He impacted anyone who admired adventure, laughter and love. He lived large, and brought us all along for the ride, like Peter Pan.”
• Flip Pallot – fly expert, host and producer of the Walker’s Cay Chronicles: “The unspeakable tragedy of Jose’s death has left a great hole in the hearts of family, friends and fans alike. The adventures he has left us on film will forever define him in our combined memory. So long ‘Grasshopper.’”
• C.A. Richardson, Flats Class TV host, Tampa Bay guide and educator: “Jose has always been an inspiration throughout my career, teaching through example by staying humble and willingly sharing his vast fishing knowledge with others at industry events and workshops. He’s been the most significant face and personality associated with saltwater fishing for nearly 20 years and our entire industry will sorely miss Jose as our most affable and loved ambassador of the sport. So long bro. You’ll always be in our thoughts and prayers.”
• Chris Peterson, President of Hell’s Bay – “I admired Jose’s energy, love for life, and dedication to his friends. Jose inspired me with his ability to make everyone around him feel as if they were his personal best friend, or Bro. He had charismatic energy to light a room with just his mere presence. Jose was always willing to give to the children’s charities, where he gave of himself and his personal time, a rare quality today. Jose brought his love of the ocean and the salty flats to all of us, like only a few have on film. He entered our homes on television and presented these adventures in such an artful and personal way. Jose, my friend, I wish you Godspeed for the next great adventure. Someday I’ll meet you there, but until then you will be missed here.”
• Will Benson, Key West guide, writer and film maker – “Watching Jose’s show was kind of a journey I’d take on weekends at school, transported back to my home in the Keys or to some exotic location. Through him I knew I wanted to be not only a guide but with a camera and as a writer be a voice and messenger to my generation about fly fishing, nature and the people. He was always cool and relevant by being independent; always presenting an intriguing, compelling and beautiful story about the people through the life, the heart and soul of a guide. He encouraged me as a film maker to look through the eyes of the ocean to see the people.”
Wejebe’s charitable contributions for people were many and helped launch Spanish Fly
Wejebe was also respected for his generosity, donating hundreds of hours to causes not only involving conservation but especially those for children such as Make-A-Wish, Big Brothers and Big Sisters, and the Redbone Celebrity Tournament Series raising funds for cystic fibrosis research.
“It’s where he was first noticed and got his start in television nearly two decades ago,” said Redbone founder Capt. Gary Ellis, “when outdoor program producer Jerry McKinnis was filming a show at the Redbone’s Mariner Outboards SLAM tournament in Key West in 1993. “Jose was a popular young Keys guide who volunteered his efforts to fish the Redbone events. He was selected as one of the guides for NFL stars Gary Dunn and Kim Bokamper. McKinnis was instantly impressed with Jose who also appeared on Flip Pallot’s shows.” The affable Cuban-born guide, whose family fled Fidel Castro’s Cuba when Jose was a youngster, was presented an opportunity by McKinnis to host his own TV show and began filming in 1994 for the 1995 initial season of Spanish Fly.

“And as his TV fishing show took off and he gained fame,” said Ellis, “he never forgot us by staying involved as a guide and by donating such unique items in our live auctions as complete three-day packages to fish as a guest on an episode of Spanish Fly. It not only raised thousands of dollars but also awareness towards the research efforts to catch a cure for CF”.

In 2000, he became close to Christian Goodpaster a young CF patient from N.C., who was waiting for a double lung transplant and who had been granted a Make-A-Wish trip to fish in the Redbone tournament partnered with his TV idol Wejebe.
“They became instant buddies,” said Ellis “With Capt. Dale Perez as their guide, Jose stood side-by-side giving Christian a great day of fishing, coaching him in the catch-and-release of both a redfish and bonefish in the competition. When Christian came off the boat each of those two days he was wearing a huge smile and saying how Jose was ‘just a regular guy,’ and ‘so fun to fish with.’ We had Christian and Jose on stage at the awards ceremony and you couldn’t wipe the smiles off their faces, nor the tears among the audience members of admiration for them.
“Several years later, Jose invited Christian to do a TV show and the young man now a college student eloquently chronicled the on-the-water Keys experience. Unfortunately Christian died not long after, when the lung transplants didn’t take and from the increasing difficulties of CF. Jose was shaken by his young friend’s death,” said Ellis. “Jose quietly did several of these types of benefits for charities.
“It’s a great loss,” said a saddened Ellis. “Jose gave our industry a very positive image showing fishing at its best, with his charitable involvements and the conservation efforts of catch-and-release in the Florida Keys.”
###Pete Johnson, Johnson Communications, Inc.
e-mail: johnsoncom@aol.com, ph: 480-951-3654