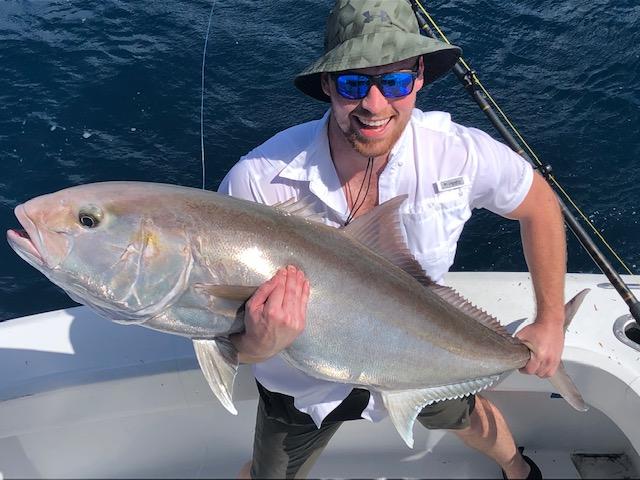 We started our deep-sea fishing charter aboard the Happy Day Today with the Topshotfishing team based out of Fort Lauderdale, FL catching live bait at the sea buoy.   Using light weight tackle, we caught Blue Runners – some of them were the prefect size for wreck fishing.   The winds were out of the east today, with a light north current and scattered weeds, common for the month of July.

We put the trolling gear out, consisting of two deep planner lines, getting down to 50 feet of depth and four surface Ballyhoo baits.  The deep planner lines had sea witches with strip baits, which are good for catching all species.  I started heading north, fishing on and off the reef from 100 feet out to 300 feet of water.  As we were heading up the line, both deep planner lines went off, and we had a double header.  Two anglers fought the Black Fin Tunas, and once the Tunas were behind the back of the boat, the mate reached down and gaffed one Tuna at a time, putting them in the fish box.   Good start to the day with a couple of football sized Tuna!

I started working the area where we got the bite, marking the fish on the depth sounder.  I went over that same area, and the surface line went off, hooking an overgrown Bonita.  Tunas, Bonitas and Frigate Mackerels will frequently hang in the same area.  As the weed moved in, I made larger turns, avoiding the weeds.  Suddenly, the planner line went off, and we hooked another Tuna on the deep line.  We continued this until we caught 7 Black Fin Tunas and 2 Bonitas.

Next, we cleared out our trolling spread of baits, and started heading towards a sunken shipwreck located off of Fort Lauderdale.  We have great wreck structures for deep-sea fishing in Fort Lauderdale, and the wrecks can range from sunken ships to tugs and even airplanes.  It is best to fish up-current of a shipwreck and position the boat into the current and wind, allowing the boat to slowly drift over the wreck.  The anglers were ready, and the mate rigged up the live Blue Runner with a 100 lb. mono and a circle hook.  We sent the bait to the bottom, and as we got within 10 feet of the wreck, the rod bent over, and we had a nice fish on.  The angler fought the fish, and after a good 10-minute fight, an Amberjack came to the surface. The mate reached down and pulled the Amberjack into the boat for a picture and release. We went back to the same spot and rigged another bait, dropping it on the front of the wreck.   We got a very quick bite, but this time the fish won, and it got away.   Back at it again with the bait rigged and dropped it down to the wreck.  The rod bent over, and the line started peeling of the reel.  We started fighting the fish, and after a great fight, another Amberjack came to the surface and into the boat for a picture and release back into the ocean.

We had an awesome day fishing in Fort Lauderdale aboard the Happy Day Today and the Top Shot Sportfishing team with a box of Tuna and a couple AJ releases. The guys wanted fresh Tuna, so when we got back to the dock, we cut and bagged the fish for them to take home.  Thanks for a great day on the water and hope you’ll be back fishing with us soon.  For a successful and adventurous deep-sea fishing charter in Fort Lauderdale FL for Sailfish, Shark, Bonito, Mackerel, Swordfish, Snapper, Wahoo, Tuna, Mahi Mahi and Grouper, contact Captain Zsak. – 954-439-8106 or email us at captdz@gmail.com    Website: www.topshotfishing.com.