Story of a Fish- by Bill Waddle 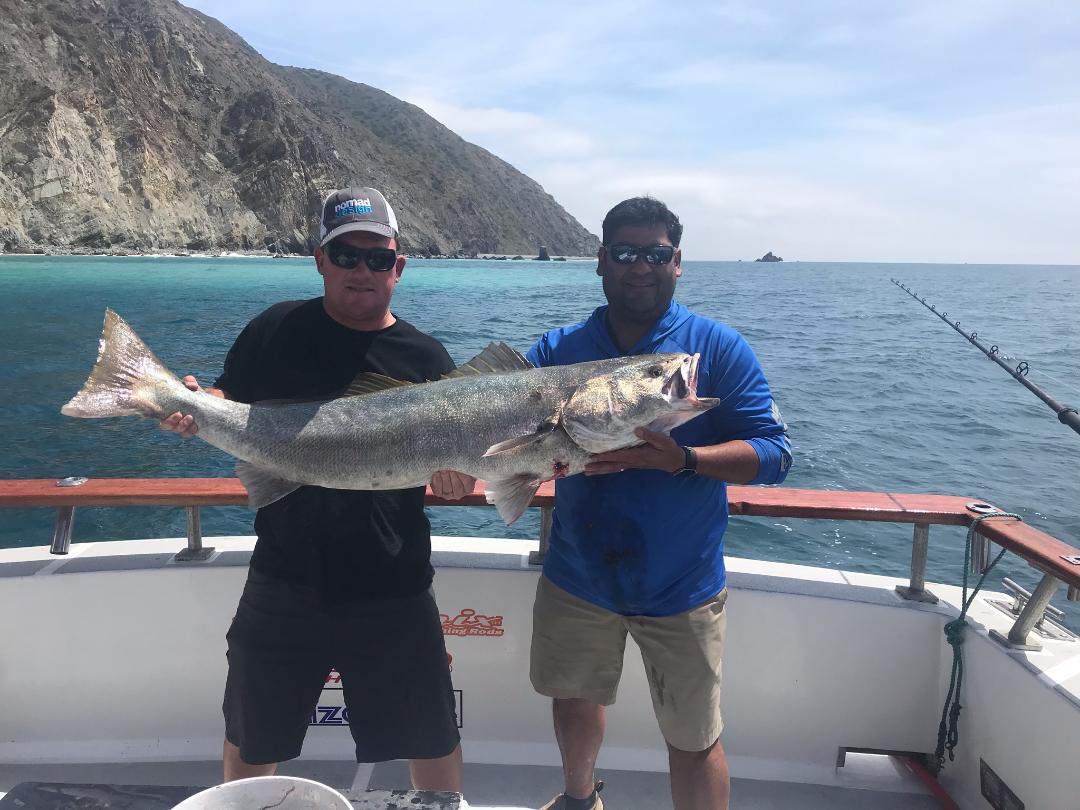 Some guys have all the luck.  Let me emphatically state that I am not that guy.  Apparently, my buddy Mohit Ghose, who is a self-proclaimed rookie, is that guy.  His first time fishing was last year when he took his maiden voyage with me to San Nicolas Island aboard Options and he put multiple yellowtail on the deck that went over thirty pounds.  Fast forward to Sunday April 14th on a less ambitious second oceanic adventure and the lucky bastard gets a 53 pound white seabass!

There was nothing textbook about this fish and he has not been on an elusive twenty-year quest for grey ghosts.  The fish did not come in the dark, nor graylight or at dusk…it was frickin noon and he caught it on a dead squid.  The only thing that was “normal” was the 3/8 ounce sliding sinker and 7/0 hook rig paired with an Accurate Boss 400 reel and Phenix Axis rod.  The fact that the fish engulfed the squid and the hook was buried deep in its gullet helped along with 80 pound Izorline fluorocarbon.  Some fish are subdued easier than others as was the case with this particular fish.  Not to say that Mo didn’t handle the fish but it’s still luck no matter how you slice it.  Mo had two other mystery bites that day leading up to what culminated in the Catalina tanker.  I caught a short calico bass and a short barracuda as was the same with the other four veteran anglers with us on the trip.

I have been chasing white seabass on a regular basis since coming home from college twenty-four years ago.  I have one wsb over fifty pounds to my credit and put in a ton of time, effort and money to attain that goal.  I resigned myself many years ago to having to work hard for what I got, not just with fishing but all aspects of life, which I am fine with but I would certainly take a stroke of luck any day.  I am not a jealous type but am a little envious that it came so easy for Mo, oh well I am just happy to see my buddy catch a fish of a lifetime.

After we double gaffed the beast we put it on ice with its tail still sticking out of our five-foot long kill box.  We did not clean the fish because Captain Wes Flesch had a plan for this particular trophy catch.  At the recent Fred Hall show Wes met Brandon Nonaka of Makai Impressions who is a Gyotaku artist.  The art form known as Gyotaku dates back to 18th century Japan.  Before the invention of cameras and photography, Japanese fishermen invented Gyotaku to record trophy catches.  These fishermen applied black ink directly to their fish and strategically rubbed special rice paper over the surface of the fish.  By doing so, the impression of the fish was transferred onto the rice paper, like a stamp.  Every scale, crease and crevice of the fish was captured, making every Gyotaku entirely true to the size, shape and texture of the specimen.

Brandon had come down to the boat earlier in the season and took impressions of a 42 pound halibut and a 20 pound lingcod.  At the time Brandon told Wes that he really wanted to do a trophy white seabass.  When we arrived back at the dock Brandon was there waiting with all his tools of the trade.  The fish was prepped and Brandon began covering the behemoth with black ink.  Next came the rice paper impression.  The entire process was really intriguing and I am very impressed with Brandon’s work.  The piece is being framed right now and it is awesome.  Mo and his wife are redoing their dining room and the Gyotaku print is going to be the focal point, talk about a conversation piece.

Mo was more than generous with his catch which was shared with everyone on board, however, being the fine chef that Mo is he laid claim to the belly and collar for himself.  He took the belly to his in-laws up north with his wife and kids over spring break and made carpaccio with it.  I got a photo sent to me and it looked delicious.  Last weekend we had a dinner party at Mo’s house. The collar got defrosted and then grilled before becoming the finfish component to an amazing cioppino.  Mo had saved the head ass well which was a critical component in the preparation of the stock for the seafood soup.  It was absolutely delicious and I am glad my wife did not see the stock making process or she would not have eaten it.  The question arises what is an Indian dude doing making all these Italian style dishes but truth be known Mo can cook anything and it is always good.  You should taste his Texas style bbq beef brisket.

I am going fishing next Tuesday night and want nothing more than to have Brandon meeting us at the dock again because I need a conversation piece in my dining room too.  My only regret with Mo’s fish is that we did not make him eat the heart! 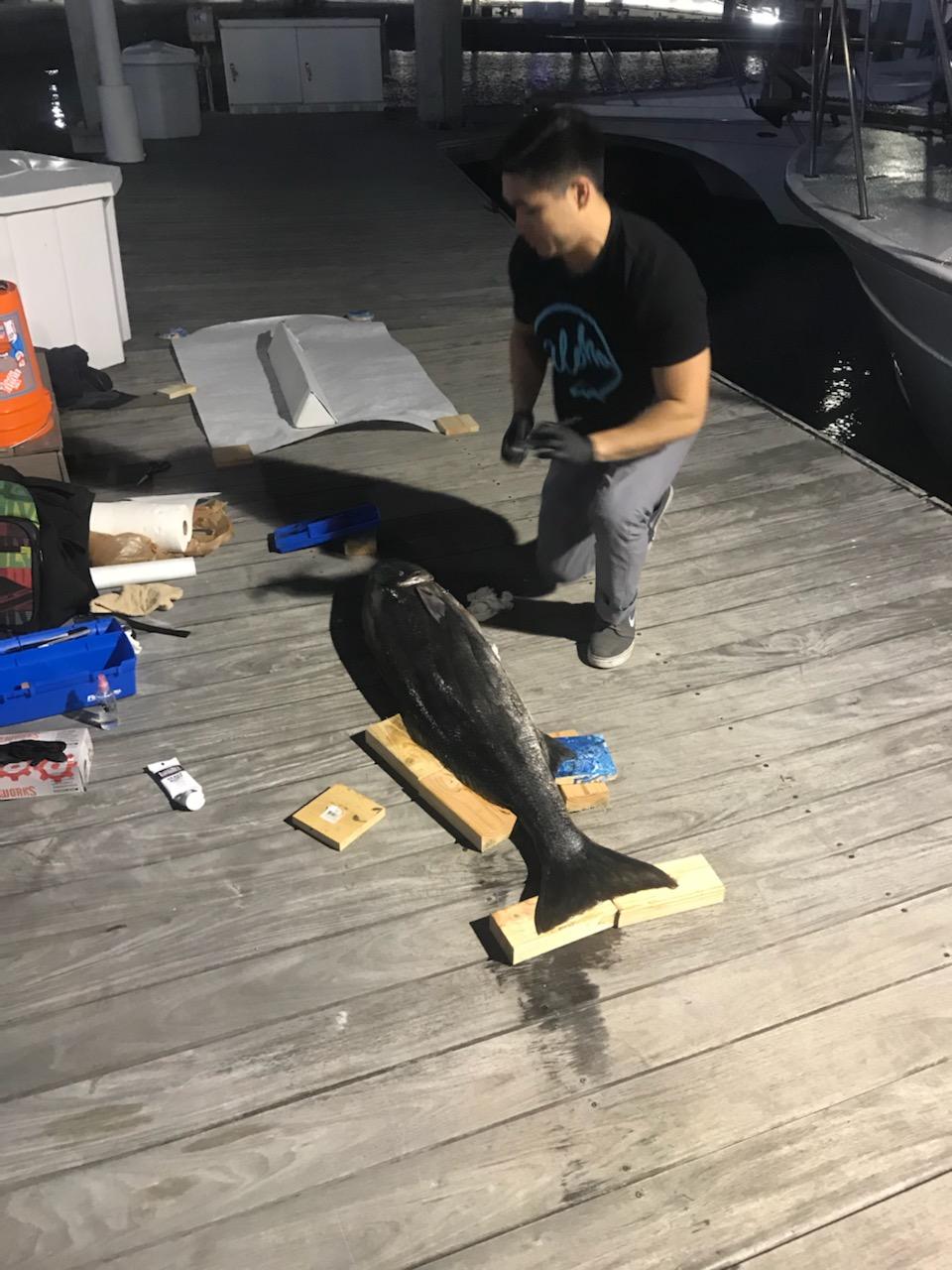 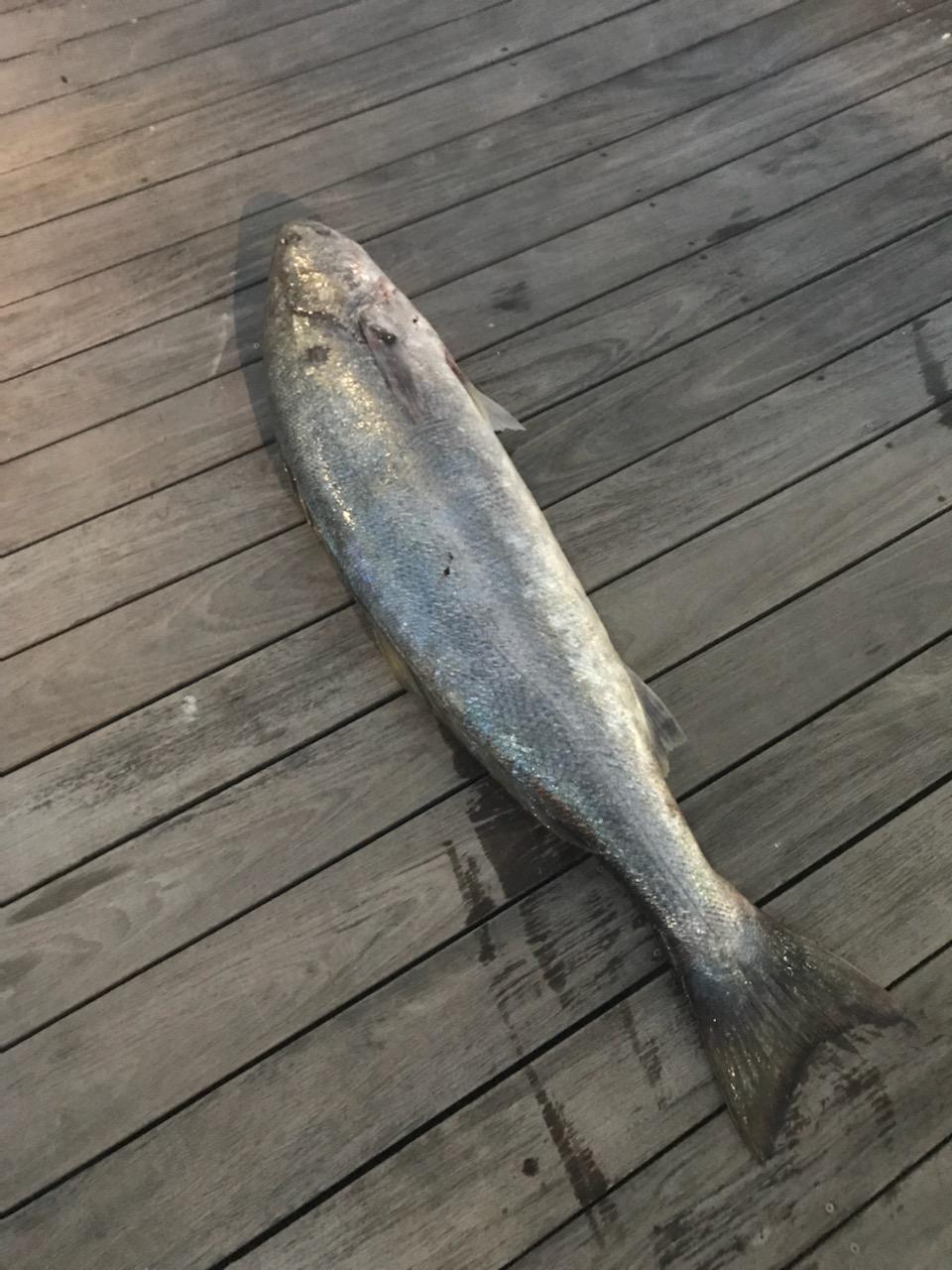 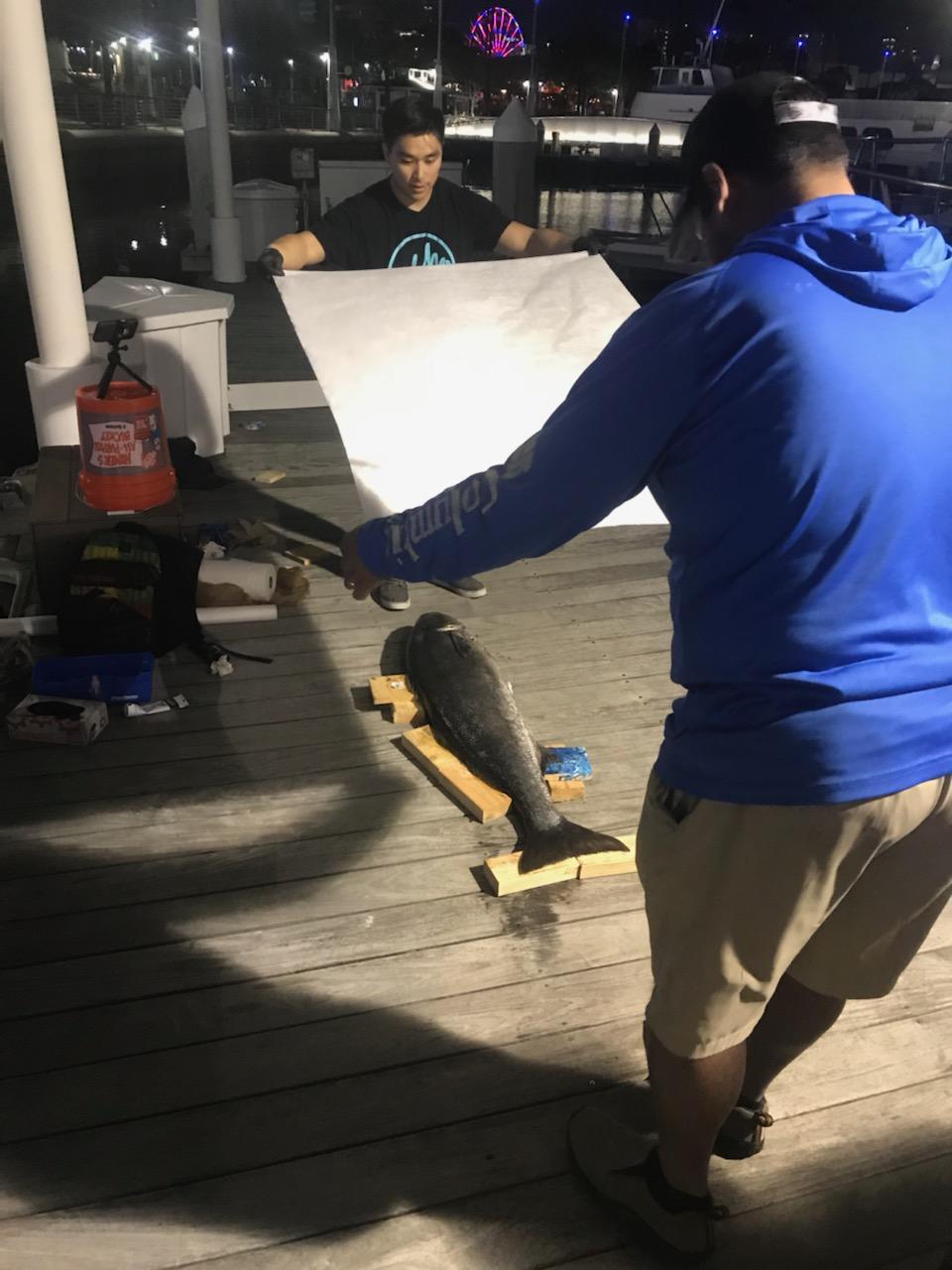 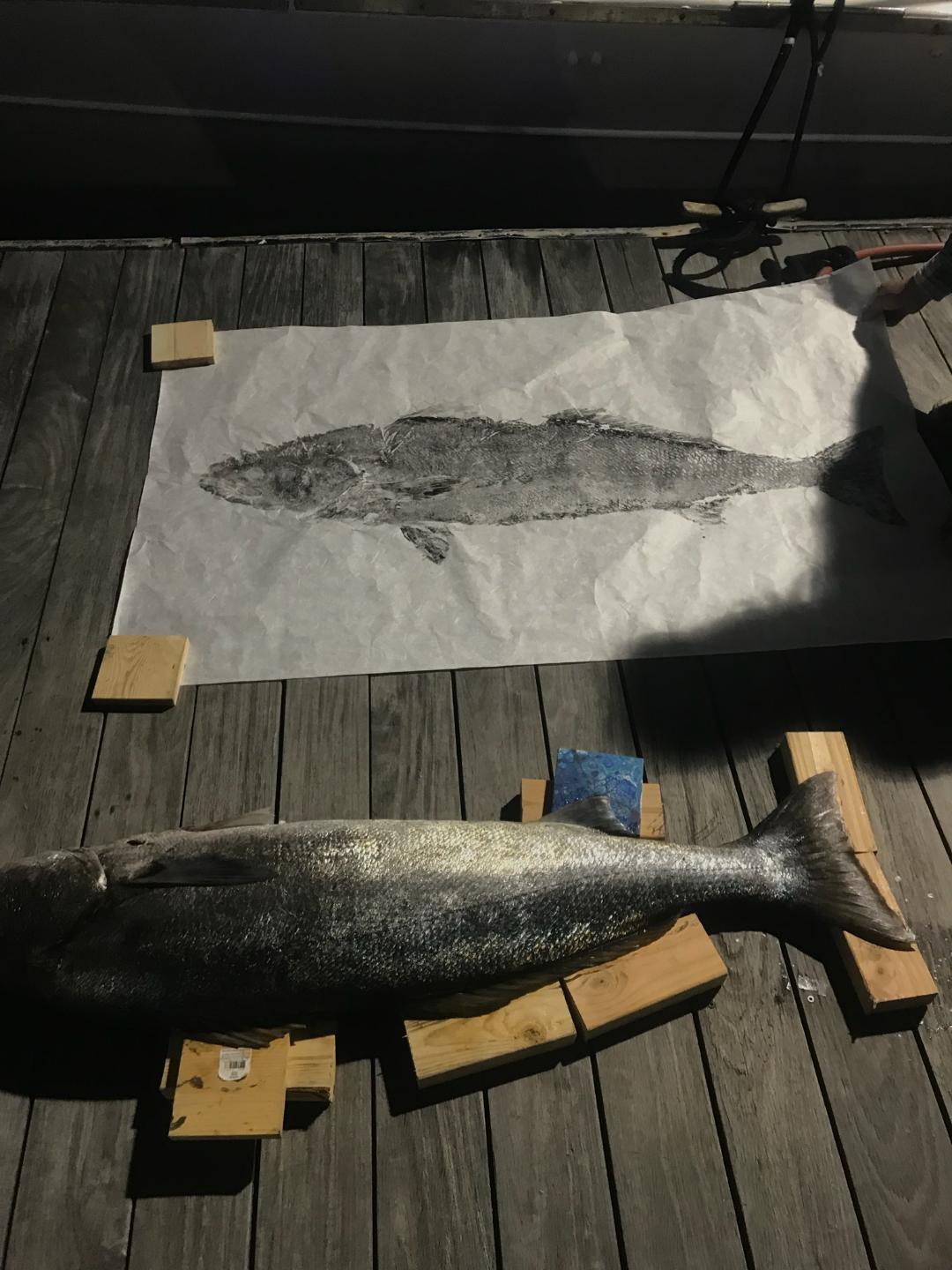 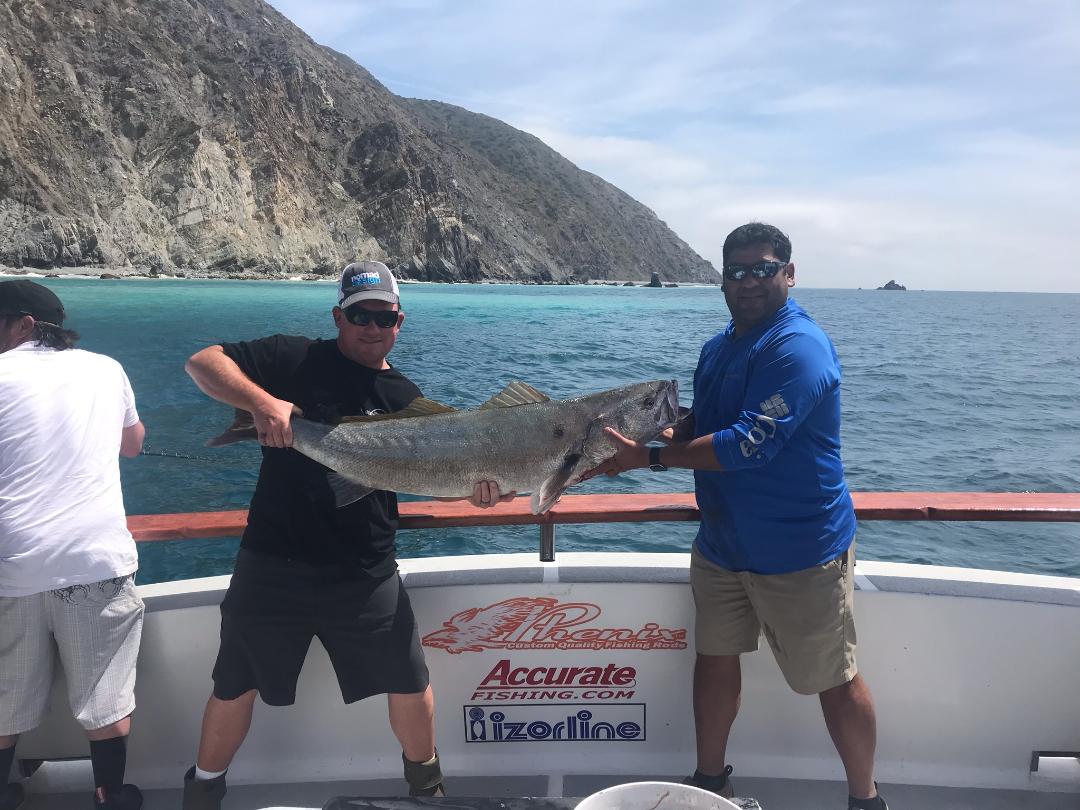