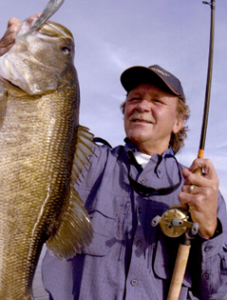 Dan Sura has been inducted into the prestigious National Freshwater Fishing Hall of Fame as a Legendary Communicator for his significant and lasting contributions to freshwater angling.

Truly one of the pioneers and trailblazers of the modern angling revolution, Dan’s background in the fishing industry has spanned over 40 years in which he has distinguished himself as an energetic communicator and hard-working angling ambassador.

Dan’s lifelong passion for angling began as a young boy in his hometown of Racine, Wisconsin, fishing the Root River for catfish, carp, bullheads and rock bass where the hook of fishing was solidly set. Today, as one of North America’s most versatile anglers, he enjoys fishing for all species from bluegill to tarpon.

In the 60’s, Dan sharpened his fishing skills and was involved with many Chicago and Milwaukee based fishing clubs where he received the respected Walleye Unlimited USA Man-of-the-Year award for his contributions to angling education. He also met fishing legends Buck Perry, Bill Binkleman, Virgil Ward, and others who fueled his passion for fishing.

Dan met Ron and Al Lindner in the early ’70s where an enduring friendship and work relationship began. He moved to Brainerd in the mid 80’s and for the next twenty years, Dan worked in every facet of the multi-media communications world including Chief Operation Officer at the In-Fisherman Communications Network. During this time, he co-hosted national television and radio shows, co-authored books and articles, conducted numerous educational fishing seminars, and was instrumental in bringing awareness to catch and release angling practices.

In 2002, he joined the Lindners once again in the newly launched Lindner Media Production Company where he managed the television division in the fast-changing electronic media world.

Although retiring in 2012, Dan still has his finger on the pulse of the industry and continues to be a media consultant and remains passionate about the conservation and preservation of our natural resources.

Dan is a proud inductee of the Normark (Rapala) Hall of Fame and the Minnesota Fishing Hall of Fame.