The Many Faces of Trout Fishing by Shawn Arnold 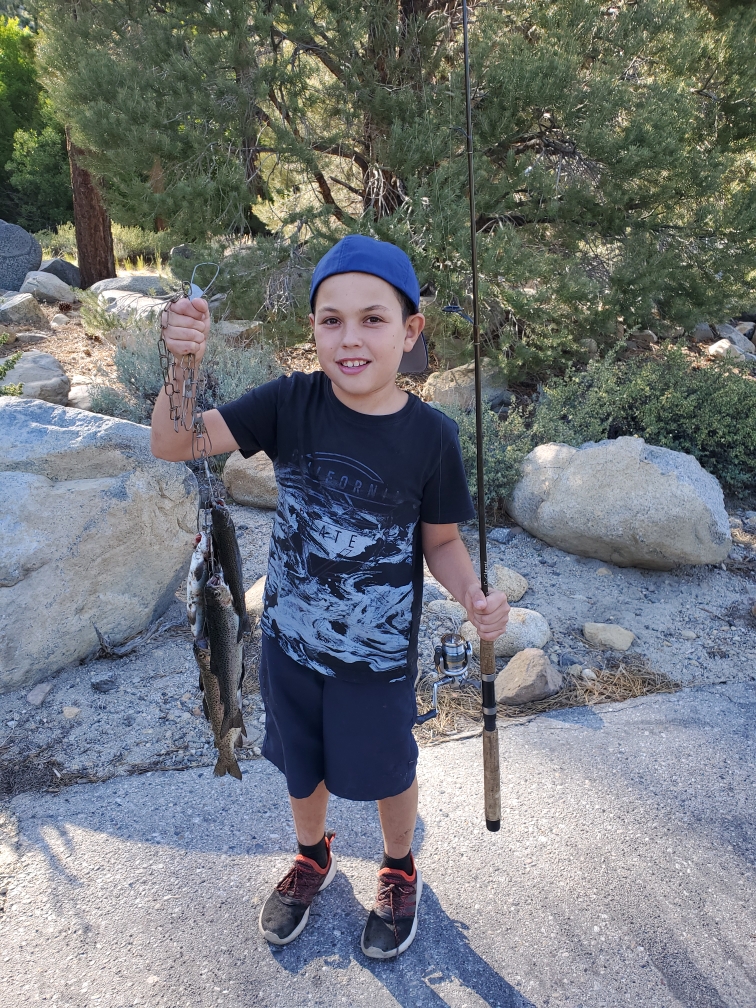 Catching a trout is unique. I know of many anglers that abhor catching trout. They are big game fisherman or purely saltwater and the thoughts of catching something they might use as bait just doesn’t appeal to them. A few years ago, I asked one of our regular contributors Bill Schaefer to write an article about catching trout in San Diego and you would have thought I asked him to rob a bank. ‘Nooooooo way’ is what I heard on the other end of the line. “I HATE catching trout” he told me.

I have a friend I used to go trout fishing with and now when I tell him I am going he just says ‘good luck’. He has zero interest in going to the eastern sierra and catching a trout. He says he wants something that is going to pull and make him work. To each his own. While I love catching ALL fish from bluegill to tuna, catching a trout has a special place in my heart.

The first is the fly fisherman. They tend to look down a little on other trout fisherman. Maybe not all fly fishermen do, but certainly a good percentage. These guys are purist who take their craft seriously. They are most times great conservationist who rarely harm a fish and are probably the least likely to leave some trash on shore. It seems to me that sometimes the art of the cast and being one with a rushing creek or river is just as important as catching a fish. For the most part they prefer areas that are not crowded. They probably spend the most time off water tending to their craft by tying flies. Some of these guys would rather go to the dentist than have to actually use spinning gear.  My guess is that a fly fisherman might be a little more well off than some others and don’t mind spending A LOT on their passion.

While Marlon Meade who is nearing 60 may be one of the most well- known people who specialize in throwing mini-jigs, a good deal of the people throwing mini-jigs are young.  These are a new breed of fishermen who will spend lots of money on the right rod. These are light tackle purist who use 7-9’ flimsy rods, a small spinning reel and plastic jigs that weigh 1/32 or 1/64 ounces. The reasons the rods are so long and flimsy is so they can cast a very small and light lure a long way. Mini-jigs are sometimes called crappie jigs but honestly the same size and style jig will catch both fish. These guys are on the move always looking for fish and can make from 500 to 1000 cast in an outing.

Color is important and while many people love exotic colors or mixtures of colors I tend to stay true to my grasshopper color which has a green head and brown body. Some mini-jigs have tails and some people put half a worm on it for a tail and a natural flavor. I believe strongly in putting a juice or scent on it like the ones from Bite-On, Berkley or Atlas Mikes. I feel that not only does that give you a chance to attract the fish via smell, when the fish bites it will hold on longer as it is not tasting something not natural. Plus, it hides the smell from that Dorito you just ate.

Using mini-jigs is perfect for catch and release as the jigs have a single hook and most times you get the fish in the lip.

The concept of fishing a mini-jig is fairly simple but if interested you should Youtube fishing mini-jigs and you too might go out and buy a flimsy rod and try your hand at catching a trout with this method.

It is not deserved but these guys have the worst reputation of trout fishermen. Just like the fly fishermen feels a sense of superiority for the way he fishes some mini-jig fishermen feel the same way about those that fish dough baits. The perception is that these guys don’t work it. They put some dough bait (Gulp!,Power bait, Zekes, Pautzke) on their treble hook, cast out, crack open a beer and wait for a bite. And for a few of them that can be true. But I have seen some of these bait fishermen in action and man are these people creative. And these guys have come a loooong way from the bait fishermen when I grew up. Basically, in the 70’ and 80’s we had marshmallows, Velvetta Cheese and night crawlers. Really not sure anyone mixed and matched back then. Now days they mix different colors on the treble hooks. Some add a worm, some blow up a worm then put some dough bait with it. Some put salmon eggs on the treble with the dough bait. There are many methods and the bottom line is, that most of them work. The key is to find the correct depth to float the bait off the bottom. I prefer the simple method of a small split shot about 18-24” from the treble hook.

Many people use a leader with a swivel and sliding sinker. While I don’t use bait as much as throwing mini-jigs or metal like Thomas Buoyants, using bait might be the most effective way to catch trout. This is NOT a good method to use for Catch and Release. Most times the trout swallows the treble hook and unless you have 10 years of being a surgeon in your background, odds are you are going to snag the trout’s inside parts as you try to get the hook out. Best thing to do if it really swallowed it and you want to release it is to cut the line and hope the hook dissolves.

One thing I will say disparaging about dough bait guys is I have wandered the Owens River and found empty bottles of dough bait. I have also found empty worm containers. I have never found an empty mini jig pack, or packaging for a metal lure for that matter. Come on guys it really is not that hard if you brought it in full to take it out empty.

I HATE trolling. I want the rod in my hand when I feel the fish hit. There is no denying that this can be a very effective method though. Many people think it is the best way to catch trout in Big Bear Lake. And in the eastern Sierra seems like the guys in the know troll big Rapalas for the big brown trout.

I have had a few run ins with trollers at Gull Lake as they troll to close and have no remorse for going through your territory. I get a sense that some of these guys think the whole lake is theirs. Not ALL are like that, but it just takes one to make blood boil in what should be a relaxing endeavor. Popular trolling methods include using a Dave Davis flasher with a worm or a Needlefish. Some use 6 to 8 -pound test on a spinning reel and some use leadcore and a conventional reel. All methods work. The trick is to find the right speed and depth. And while I mention that this is not my cup of tea, it is a very good method to catch trout.

What ever your method of choice is, this winter go to one of our local lakes ranging from San Diego to Apple Valley and go catch a trout. You might enjoy it.