Why Fish for Walleye? 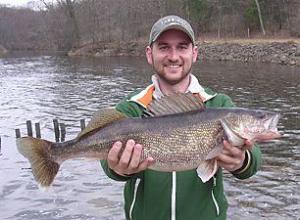 We have walleye. Illinois has walleye and we go after them because they are there.
Why would any angler choose to pursue a fish that is moody, hard to find, often difficult to entice into striking and not much of a fighter when finally hooked?

There is, in this case, a one-word answer: Walleye.

That doesn’t say it all, but those who can relate to the song “Wasted Days and Wasted Nights” to the sport of walleye fishing get the drift.

Why, indeed, do we cast or troll ourselves silly at times, searching for a fish with eyes like dull marbles and a razor-edged mouth that will gladly bite off the tip of your finger if you get careless?

One explanation is simple: The doggone things are delicious. The meat is white, sweet and firm, a condition that is typical of the perch family (although often called walleyed pike, walleyes aren’t pike.) Walleyes also are a challenge, whether the angler prides himself on finding fish-holding structure and reading a sonar printout or not. In some instances, one wonders whether the latter capability is more of a distracting hindrance than a scientific aid. To sum it up, as does A.J. McClane in his book, “McClane’s Game Fish of North America,” walleyes are “entertainingly moody and invariably delicious” and “the traditional reason for lighting a fire at noon in the bush country.”

A.J. was referring, of course, to the habit of Indian guides in Canada serving shore lunch of fried walleye fillets to their dudes.

But walleyes in wilderness are one thing and stocked walleyes in reservoirs, particularly Rocky Mountain region waters, are another. It is common to read gill-net survey reports issued by game and fish agencies that tell of obscene numbers and sizes of walleyes counted and released at reservoirs where grumbling, empty-stringered fishermen later complain there are no walleyes left.

There are major differences between wilderness walleye fishing and Western- state walleye fishing – one of them being fishing pressure. Also, Canadian walleyes are often caught in flowing water, where they’re more easily pinpointed, and in Western waters they often have a lot more food to prey upon.

Yet they can be caught in generous numbers in broad daylight at times, usually from mid-May through June. September and October are good months too.

A sonar-graph doesn’t necessarily help because:
1) Walleyes often hug the bottom so closely that they can’t be detected on a fish-finder screen or graph, which makes them a kind of piscatorial Stealth Bomber.
2) When they can be seen on a graph, it’s when they’re suspended, and no one has found a consistent way to make suspended walleyes open their mouths.

Maybe the most effective walleye tactic is to simply troll a bottom-bouncer rig with a whole nightcrawler, or trail a weighted crawler harness as the boat drifts with the wind. Jig fishermen can up their odds by tipping the lure with half of a nightcrawler.

What are the best methods for taking Walleye? Many anglers prefer the jig and minnow rig and the slip-sinker rig dressed with a floating jig head and a fathead-shinner minnow. If you can master these applications, you’re going to take your share of walleye in spring.

They’re a challenge. They’re intriguing fish, and they do different things from day to day, hour to hour sometimes. If you want to be a consistent walleye fisherman, you better be able to do more than just jig fish, or cast crankbaits, or whatever. Walleyes are normally characterized as deep-water fish. You fish walleyes no matter what the weather.