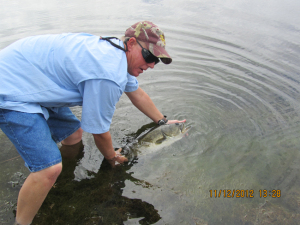 Angling ethics is really a matter of common sense and courtesy. However, since it contributes to every angler’s safety, success and enjoyment today, and to the future of our sport, it should be of true concern to everyone who casts a lure or wets a bait.

Conservation agencies, such as your Florida Fish and Wildlife Conservation Commission (FWC), fishing guides, tourism destinations, marinas, tackle shops, anglers and boaters all play roles in making fishing more fun and satisfying for everyone on the water. They share an abiding love for aquatic resources and the conservation stewardship ethic that helps keep our natural resources pristine.

This checklist of ethical angling practices provides a starting point to make fishing more enjoyable, safe and sustainable for everyone, including future generations.

An ethical angler:
• Promotes, through example and mentoring, an ethical use of aquatic resources.

• Values and respects the aquatic environment and all living things. Treats other anglers, boaters and property owners with courtesy and respect, including removing boat trailers promptly from active launching areas, watching wakes around other boaters, and providing adequate fishing space to anglers already on the fishing spot.

• Avoids spilling and never dumps pollutants, such as gas or oil. Appropriately disposes of trash, including worn lines, leaders and hooks. Recycles whenever possible and keeps fishing sites litter-free.

• Purchases required fishing licenses and permits. If you are exempt, you may still purchase a license to contribute directly to conservation. All fishing license dollars go to the FWC – and bring in matching federal funds to Florida for Sport Fish Restoration (See MyFWC.com/License.)

• Learns and obeys angling and boating regulations and can identify local fish to adhere to the rules.

• Keeps no more fish than needed for consumption, and never wastefully discards fish, while complying with the law. Carefully handles and releases alive all fish that are unwanted or illegal to keep. Uses tackle and techniques that minimize harm to fish when catch-and-release angling is required (see below for details).

• Takes precautionary measures to prevent the spread of exotic plants and animals and does not use diseased or nonnative baits.

• Practices safe angling and boating by following the laws and using common-sense practices to prevent injury to himself, others or property.

• Protects the environment from damage caused by careless boat operation, including prop-scouring of vegetation, wake damage to shorelines, power-loading problems at ramps, anchoring on reefs and striking animals such as manatees or sturgeons.

• Conserves energy and water on a daily basis, knowing it affects local fish and wildlife.

“Practicing catch and release, especially of larger bass, is one of the biggest contributions anglers can make toward the future of Florida’s bass fishing,” says Tom Champeau, director of the Florida Fish and Wildlife Conservation Commission’s Division of Freshwater Fisheries Management. Even though it’s the right thing to do, it’s always nice to have an extra incentive. Hence the TrophyCatch program, which rewards anglers for letting their trophy continue to swim in Florida, with prizes donated by the fishing industry. Just registering online enrolls anglers into a drawing for a Phoenix bass boat powered by Mercury.

Fortunately, this ethic has spread rapidly throughout the Sunshine State’s freshwater angling fraternity in recent years. All organized tournament participants now take particular pride in releasing every bass following weigh-ins, while a substantial number of recreational fishermen are doing the same immediately after landing a fish. “In effect, these fish are being recycled, since it often takes eight to 10 years to produce a trophy bass, and, because it takes so long, it’s likely they have been caught many times before,” said Champeau.

“The way they’re handled by anglers will determine if they’ll live to reach the larger sizes that people prefer to catch.”

By using care, common sense and proper techniques, released largemouth bass have an excellent chance of survival.
Bass caught on live baits or artificial worms often swallow a hook, thus reducing their chances for survival. To offset this circumstance, FWC biologists recommend setting the hook immediately after a strike, which may mean losing an occasional fish but drastically increasing its survival rate. Land the fish as quickly as possible; don’t make it work to exhausation by playing it too long.

Barbless hooks contribute to easier and quicker releases. If you don’t have a barbless hook, simply pinch down the barbs on regular hooks with fishing pliers. By keeping tension on a line while playing a fish, it’s less likely that you’ll lose any during a battle. Keep in mind that smaller hooks do less harm than larger ones, single hooks are better than trebles, and circle hooks are best of all.

FWC further suggests not using rough or knotted landing nets that cause abrasions as a fish thrashes about and scrapes its mucus, that slimy coating that serves as a primary defense against disease. “Once this mucus barrier is broken, bacterial and fungal infections can develop that later cause mortality, even if the fish appears to swim away unharmed. If you must use a net, get one with a soft, smooth mesh.”
When releasing bass, be gentle, grip them only by the lower jaw, if possible, and try to keep them in the water when removing a hook.

“Don’t drop or throw a fish back,” advises Champeau. “Instead, lower it gently into the water where it can swim away on its own after being revived.”

If a fish is taken from the water to measure or photograph, avoid touching its eyes and gills. Also be careful to support the weight of a large fish with your other hand, if you must lift it out of the water, but don’t bend the jaw downward. One of the most crucial rules is to avoid keeping the fish out of water for more than 30 seconds at a time (approximately as long as you can hold your own breath). So have your camera, scales and measuring tape ready to go.

You can also place the fish back in a live well or dip it back over the side to let it breathe if you need to reset for another photo. The live well should be aerated, at nearly the same temperature as the lake water and, if desired, you can use 0.5 percent salt in a live well to stimulate slime production (0.5 pounds unionized salt per 10 gallons of water). Never place fish in chlorinated tap water.

Such tools as commercial “de-hookers,” long-nose pliers and surgical hemostats greatly minimize damage and stress during hook removal operations. If a fish is hooked so deeply that removal will cause damage, it’s best to simply cut the line and leave the hook undisturbed, as the fish’s digestive juices will eventually erode the hook.

Let’s keep fishing great in Florida by recycling our catches. Also, let the FWC help you to boast about your catch by sharing photos and claiming your rewards at TrophyCatchFlorida.com.