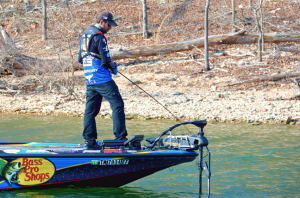 Preamble: Admit it. Our eyes are drawn to fancy, new-fangled objects. It’s all over pop culture: Pimp My Ride. The Bling Ring. Tricked Out TV. Every time we turn around, it seems, someone’s flashing another superficial doodad or device. In fishing, it’s a slightly different story.

DeFoe, who in a short span of four years has racked up some impressive credentials on the B.A.S.S. tournament trail, has also emerged as one of the more techno-savvy anglers on tour. In a game that’s increasingly driven by technology, however, competitive fishing for DeFoe is still mostly about dropping the trolling motor and zinging casts down the bank.

But even the trolling motor’s a techno-tool. Albeit after decades of routine use, the common bow-mounted device has become as synonymous with bass fishing as a plastic worm. Like a rod and reel, livewell or crankbait, the trolling motor serves a purpose; has a singular function that helps put more fish in the boat. So while DeFoe speaks with many folks each year who puzzle over his vast network of electronics, he’s comfortable saying that each and every device plays a critical role in his success on the water.

As one of the nation’s top bass anglers, DeFoe freely admits he’s in an enviable position that gives him access to all the sweetest stuff. (Admit it, you would too.) And if the ‘bling on his bow happens to carry a certain “cool” factor, that’s just fine with him.

“These days, no matter where I go, I probably get more questions from folks wondering about electronics than any other topic or piece of equipment,” says the Knoxville, Tennessee based angler. “Specifically, they want to know how electronics can help them catch more bass. That’s the main reason we spend the money and put ‘em on our boat—trolling motors, Side-, Down- and 360 Imaging, Talons, GPS mapping and underwater cameras. If they don’t help us catch bass we’re not going to use ‘em for very long.”

For years, many anglers neglected their sonar-fish finder units. The reason was simple. Most bass anglers spent most of their time in shallow water, casting to visible cover along the bank, where sonar beams couldn’t “see.”

Last season, DeFoe and a few other anglers on tour began using a new sonar tool that unlocked the unseen shallows. Not only was it now possible to see structure below the boat, but the new 360 Imaging device also revealed the water in front of and on all sides around the boat—even in 10 feet of water and less.

A breakthrough occurred for Ott at the 2013 Elite Series event at Lake St. Clair. “On day one, there were three of us fishing this 8 foot point. Little wolf packs of big smallmouths were working all around it, but the point didn’t seem to have any cover to actually concentrate fish.” DeFoe and several others had taken numbers of 3 to 4 pounders off the point, but at day’s end, it seemed to have dried up.

On the second morning, after a few bites, the fish again appeared to vanish. “After the other boats left the area, I decided to hang around a little longer. I felt the fish were still close by, so I returned to my waypoints on the spot, and just moved along studying the screen of my Humminbird 360 Imaging unit.”

Finally, DeFoe spotted a single object on screen—a moderately sized boulder lying on the otherwise clean point. Set to search 100 feet all around the boat, the 360 unit allowed him to determine that the boulder was approximately 75 feet ahead of his position. “I picked up a tube,” said DeFoe, “cast toward the target and immediately got bit. As I fought the 3-1/2 pound smallmouth, I spotted a bunch of his buddies following him to the boat.

“In my head, a light switch went off. The bass hadn’t left at all but had simply moved away from the boat traffic and repositioned around this single insignificant boulder. Without 360, I would have never seen or caught this fish without spooking him first. Nor would have I stayed and caught several more good fish off the same rock on day 2 and day 3.”
Classic Conditions

At the 2013 Bassmaster Classic, DeFoe cashed a sweet 4th place check, riding the same 360 Imaging unit to success. “Worked awesome for identifying the sweet spots on offshore structure. I could quickly zero in on the stuff that looked good and fire casts right to targets that held bass.”

DeFoe indicated that ultimately, his specialized “full-circle” sonar guided him to key little ditches that cut across main river bars. “Fishing new water on Guntersville, the 360 showed me stuff all around the boat that I couldn’t have found in days or weeks of random casting. At the Classic, you don’t have time to scout. But if you can scout while you’re casting, that’s huge.”

“The coolest thing about 360 was that while I fished, it helped pick out targets—stumps, small patches of emerging grass—before my boat reached them and potentially spooked fish. It showed me these little low spots on the bar, where I eventually caught most of my fish. Got to where I could come pretty close to hitting on-screen targets on the first try. Often, I‘d get bit right away.”

“In practice, we’re always trying to find active fish, but not necessarily catch too many of them before the tournament starts. Last year on the St. Lawrence River, which has really clear water, I pulled in to a spot, made a few casts and finally started catching them on a dropshot with a Berkley Gulp Fry. I was marking a few fish on my sonar, but it was hard to tell how many were there. I dropped the Aqua-Vu and immediately saw a nice looking rockpile and probably several dozen smallmouths cruising around. It gave me the confidence to leave the area alone, so it would be fresh come tournament day.”

At the recent Elite Series event on Table Rock Lake, DeFoe’s 2-D sonar identified a massive school of sizeable fish, suspended in timber 20 feet down over 35 feet of water. “It looked like the mother lode. So I spun around and threw a swimbait through the zone. Fished this way for 20 minutes without a bite. I could see fish on sonar, grouped so tightly they almost cluttered out the screen. Finally, I dropped the Aqua-Vu, and saw . . . Gar. Piles of ‘em.

“For that reason alone—fish identification—I always keep the camera in the boat. Imagine how much time over the years we’ve spent fishing for the ‘wrong’ species, and wondered why they wouldn’t bite.”

DeFoe adds that he often simply uses the camera to confirm or disprove what he’s seeing on sonar. “It’s awesome for showing bass that get lost in cover—grass, brushpiles or under docks. I like to watch how they’re relating to the cover; how they move around and alongside it. Fun to watch all this on screen. My kids love it. But it’s also a great learning tool that can help determine patterns or even indicate what type of presentation will work best.”

Whether your rig resembles a tricked-out tournament battleship or not, the game’s the same. Find bass. Catch a few. Look cool . . . well, who really cares? Just have fun. So says bass fishing’s high-tech redneck.