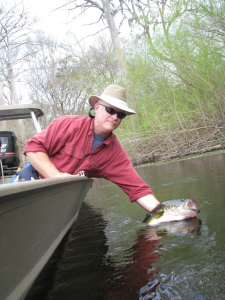 How often have you caught a great fish and wished you could release it somewhere special for you or a friend to catch again? Catch-and-release has caught on, especially among bass anglers, but sometimes the release isn’t immediate. There are times when it is not good for the resource to release the fish; paticularly when the fish is relocated to a different lake or river.
Catch-photograph-release (CPR) is a great way to collect memories. The big thing to remember is if you are going to release a fish–do it legally and do your best to ensure the fish will survive to thrive. Proper handling means keeping the fish out of the water as short a time as possible—consider holding your own breath while the fish is out of the water as a gauge. If the fish is going in a live well, remember to exchange the water frequently and keep it cool.With that said, when and where should you release your catch? First, if the law requires a freshwater fish to be released in Florida, it should be done as quickly and effectively as possible, but taking the necessary measurements or a photo is permitted. It should be released in the immediate vicinity to where it was caught without placing it in a livewell or stressing it.

When a native fish is legal to take, it is your discretion whether you harvest it or release it. Generally speaking, size and creel limits have been established so that harvesting these fish will still allow sustaining the fish population based on natural reproduction, mortality rates, growth rates, and habitat capacity. In certain circumstances, such as where slot limits are specified, it is especially helpful to remove the smaller fish (below the slot). In theory, reducing the numbers of small fish reduces competition, which allows the protected fish in the slot (for instance 15 inches to 24 inches) to grow more quickly.Non-native fishes (other than peacock bass and triploid grass carp) should be harvested. Most make good eating, and the best way to transport them is on ice. They should not be released and definitely should not be relocated.

Legally taken fish should be released as close as possible to where they are caught, but certainly within the same water system. Rules went into effect specifically for relocating largemouth bass in July 2010 that affect anglers relocating bass as well as those purchasing and stocking bass in private ponds.
Rule 68-5.002 (see FLrules.org) states that northern black bass (Micropterus salmoides salmoides) is a conditional non-native species. Possession, importation into Florida, sale or transportation of any live specimens or eggs of this species of black bass is prohibited except by special permit from the FWC. Hybrids of the northern black bass and Florida subspecies (M. s. floridanus) are legal to possess in the Suwannee River and its tributaries and north and west of the Suwannee River.
The reason for the rule is to protect genetically pure Florida-strain largemouth bass, also called Florida largemouth bass. This subspecies of largemouth bass is native only to Peninsular Florida (south and east of the Suwannee River), and is the cornerstone of the state’s annual billion dollar black bass fishing industry.

Under this rule, only aquaculturists, or fish farmers, whose fish have been genetically tested and authenticated as pure Florida largemouth bass by the FWC are allowed to possess or sell bass to customers for stocking south and east of the Suwannee River. There are two such fish farms (Florida Fish Farms Inc.: 352-793-4224, and Shongaloo Fisheries: 352-468-1251) currently registered with the Florida Department of Agriculture and Consumer Services (FDACS) and authorized to sell authenticated pure Florida largemouth bass.

These rules were implemented following extensive genetic research that identified even more refined differences with largemouth bass stocks in Florida, which could relate to localized adaptations that allow the fish to thrive in particular habitats and climates. Florida state-run hatcheries now actually use four specific genetic conservation units to ensure that our hatcheries protect these resources. But in an age of commercial hatcheries and anglers transporting fish around the state in live wells, regulations were necessary.

“Florida largemouth bass are adapted to Florida’s subtropical climate and typically spawn earlier in the year than northern largemouth bass. If the northern subspecies or intergrade (i.e., hybrid) bass spawn with Florida largemouth, their offspring may inherit genes that may reduce growth or survival, and other, less obvious genetic traits,” said Brandon Barthel Ph.D., a FWC black bass geneticist. “If enough bass with northern genes spawn with Florida bass, the unique characteristics of the Florida subspecies will be lost forever.”

Anglers come to the sunshine state from all over the world to catch trophy Florida largemouth bass. The FWC is doing everything possible to protect the genetic purity of this ecologically and economically important subspecies of fish and to promote their wise use and release. We need your help as an angler and concerned citizen to help ensure Florida bass remain the premier North American sportfish, providing limitless recreational enjoyment.