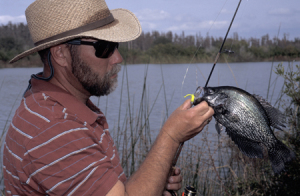 Many freshwater anglers love pursuing schools of black crappie during the cooler months in Florida. Non-resident anglers avoiding the deeper chill of the northern states congregate around some of these premier fisheries every winter to join Florida’s own fishers who enjoy pursuing and harvesting these succulent pan fishes.

Crappie are high profile fish with their own professional and amateur enthusiasts. Crappie USA kicked off their 2012 season with an event at Crescent Lake in January. Darrell Van Vactor, President of CrappieUSA, said “The 2.63 pound crappie that won the big fish award on Crescent Lake was definitely a great crappie, in fact after running crappie tournaments all over the state of Florida for over 25 years it is the best single fish ever weighed in, and the winning weight of 14.5 pounds for seven fish was also the best winning weight.” He went on to say “Crescent Lake is truly the best crappie water we have found in your state and your department is evidently doing a great management job there.”

Bass Pro Shops Crappie Master Tournament Trail will have their Florida State Championship in February on the Harris Chain of Lakes around Tavares. Anglers can find books, magazines, web sites and television shows all dedicated to highlighting great crappie fisheries. The fast action, once you have located a school, makes crappie a great fish for families and youth.

Steward points out that reports from local anglers, and trawls, electrofishing, creels and other data from fisheries biologists, and knowledge of habitat trends all go into selecting these lakes. The list focuses on larger water bodies that have good access and can sustain more fishing effort, so even if your local lake isn’t on the list, don’t be afraid to try it. One of the best things about crappie fishing in Florida is that you can find them in almost all of our lakes.

Unlike most other panfish, crappie spend much of their time offshore, feeding on small fish. Successful anglers often drift through deeper water, fishing with small minnows or freshwater grass shrimp until they find a school. Try a light wire #4 hook and small split shot below a float. Speck anglers typically use several rods or poles, fishing at different depths until they pinpoint concentrations of fish. In the extreme, these are referred to as “spider rigs” for the way the rods look like spider legs sticking out from all sides of the boat. Specks move inshore to spawn during early spring, sometimes gathering in large numbers around heavy cover. Crappie also readily strike artificials; 1/16 oz. to 1/8 oz. feathered or curly-tail jigs in white, yellow, pink and chartreuse are popular. Tipping the jig with a live minnow makes it even more effective. Night fishing for crappie is equally productive. Any of the above baits fished near a lantern or floodlight can produce nice stringers. Most crappie fishing occurs in cooler months, but anglers who fish into the summer can do very well, especially at night.

The FWC does not take crappie fishing for granted. After black bass, crappie are the second most popular freshwater species in Florida, followed by bream in terms of angler effort. Angler success rates over the past five years averaged approximately 1.2 crappie per hour statewide (compared to 1.9 for bream and 0.7 for bass). Last year FWC hatcheries produced nearly 20,000 crappie for stocking, but due to their natural proliferation stocking is rarely needed. These fish went to Commission Managed Impoundments in the panhandle to bump start the population following drawdowns.
As with other fish, healthy habitat is the key, and occasional regulation changes can help sustain quality crappie fisheries. For instance, a new regulation is currently being contemplated for Lake Griffin, and the FWC is seeking public opinion. The proposed rule would establish a 10-inch minimum size limit for black crappie from Lake Griffin (there is not a general statewide length limit for crappie) and keep the statewide daily bag limit of 25. Biologists expect implementation of the rule to prevent the current bumper production of big crappie from being over fished and help more anglers to enjoy the fishery for a longer time.

On Lake Istokpoga crappie anglers expressed concerns that there was a decline in the size and numbers of fish being caught there in the past few years even though the fishery is still among the best in the state. In response, FWC staff gathered data from creel surveys and angler interviews, which confirmed a general decline in the lake’s crappie fishery.
FWC staff are conducting intensive fisheries research focused on assessing Lake Istokpoga’s overall black crappie population and evaluating fishing success through a tagging study, which rewards anglers for reporting tagged fish. Part of the team’s plan came together on Dec. 3, when FWC staff partnered with the Friends of Istokpoga Lake Association (FOI) and a few local fishing guides to host a “Fun Fishing Day.” During the event, 61 crappie were tagged. A cookout hosted by the FOI rewarded participants with a free lunch and drawings for donated prizes. Additionally, local crappie fishing guides Jack Wagner and Harold Heskell allowed FWC biologists to ride along on a few night fishing trips, resulting in another 137 fish being tagged. Including fish collected by researchers, a total of 409 crappie were tagged and released on Lake Istokpoga in December 2011. Monitoring tag returns will help FWC biologists to come up with a conservation plan to improve this important fishery.

Crappie provide a great fishing opportunity, especially this time of year, and can be an exciting way to introduce new anglers both young and old to the lifetime sport of fishing. Moreover, many anglers think they are one of the tastiest of freshwater fishes, so give them a try.