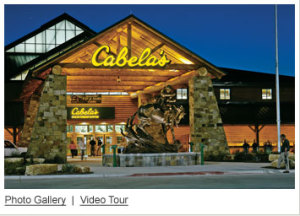 Cabela’s expects to open the store in fall 2014. The 85,000-square-foot store will be located in the Tamarack Village Shopping Center. It will be Cabela’s fourth store in Minnesota, following the East Grand Forks, Owatonna and Rogers locations. Construction is expected to start in fall 2013.

The store is expected to employ up to 185 full- and part-time employees, and most will come from Woodbury and the surrounding area. Cabela’s typically attracts as staffers experienced outdoor recreationalists, who join the Cabela’s family of employees known for their passion for and knowledge of the outdoors as well as excellent customer service skills.

“Minnesota offers a tremendous array of outdoor pursuits and that has been highlighted by the commitment and loyalty of Cabela’s customers across the state,” said Cabela’s Chief Executive Officer Tommy Millner. “Cabela’s has had remarkable success in the East Grand Forks, Owatonna and Rogers locations and we expect similar results in Woodbury.”

The building’s exterior will reflect Cabela’s popular store model with log construction, stonework, wood siding and metal roofing. A large glass storefront will allow customers to view much of the store’s interior as they approach the building. The inside will feature the company’s next-generation layout, designed to surround customers in an outdoor experience, including dynamic wildlife displays and trophy animal mounts displayed on a mountain. The store will also feature a Boat Shop, Gun Library, aquarium, Bargain Cave and Fudge Shop.

Cabela’s stores showcase thousands of products, including hunting, fishing, camping, hiking, boating and wildlife-watching gear, as well as clothing and outdoor-themed gifts and furnishings. The company is famous for its strong brand and world-renowned reputation for delivering quality merchandise, value and legendary customer service.