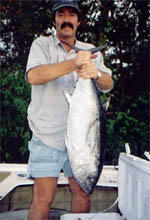 If it has been your habit to take a late-winter vacation in Florida or Texas, consider going to southern Louisiana for a change.

You can promise your spouse a few days doing the tourist routine and the night spots in New Orleans, then travel down the Mississippi River via State Route 23 about 90 miles to Venice and some fine Louisiana fishing in one of the most unusual places you’ve ever been.

Here are the possibilities in such a trip.

Venice as ugly, ”the armpit of the state,” with storage tanks, machinery, junk and odors that are perhaps inevitable in such an important terminal for the Gulf oil operations. It is also the end of the road, literally, the last stop for wheeled vehicles along the Mississippi.

The town has just one marina, the Venice, two years old, whose operator is former charter boat skipper.

The people who know the area put up with the ugliness of the town because it’s the jumping-off place to the delta and some of the best, and most varied, fishing in the state.

If you want to go fishing in salt water, the blue water of the Mississippi Canyon is just seven miles off shore. If you want to fish in fresh water there are hundreds of square miles of canals, flooded cane and grass just loaded with crappie and bass.

Charter fishing trips begin with the 20-mile trip down the river to Head-Of-Passes and then out one of the passes to the Gulf.

The trip down the river is an experience all by itself. You’ll see huge, ocean-going ships going up and down the river and see all kinds of wildlife, including thousands of ducks and geese.

Fishing in the Louisiana Gulf
Out in the Gulf you may fish for blackfin tuna, which reach 20-30 pounds, or yellowfin tuna, which weigh over 100 pounds. Sometimes you’ll get into a school of blackfin feeding on the surface. You can cast to them with light tackle and really have a ball – some of the most exciting fishing you’ll ever see because even a twenty pounder will just wear you out.On the grass lines you can fish for dolphin and wahoo, and you can always catch sharks – plenty of sharks.

On calm days, anglers sometimes anchor or tie up to oil rigs and fish on the bottom for snapper, grouper, etc. The northern Gulf’s once-excellent fishing for large king mackerel has deteriorated and that the season is now closed most of the year.

There was just too much commercial fishing but since the quotas were established, the fish are starting to come back.

Windy weather is fairly common in the northern Gulf in the spring, and when it’s too windy to fish offshore, anglers can stay in the delta and fish in fresh water.

You can catch a lot of largemouth bass up to about four pounds; once in a while you’ll see one larger, but not often. How you fish depends on the level of the river. If it’s up and kind of muddy, look for clearer water in the canals and throw spinner baits along the grass edges or lily pads.

Farther north, behind Venice, you can usually find clearer water and catch fish by throwing plastic worms or crank baits. Sometimes the best way is to flip plastic worms right into the cane.

The daily limit on bass is 15 and you see a lot of limits. Some days you’ll catch 30-50 bass. You’ve got to catch a lot to put together a string of nice fish. Some days, of course, it’s tough. Some days, like when the river’s on the rise, it’s best to just go out on the Gulf.

Crappie fishing typically isn’t as good as the bass fishing but that anglers can usually catch many crappie of around 3/4-pound on minnows or jigs.

‘If you get tired of that you can go on down into brackish water and fish for red drum and speckled trout.

You really see a lot of wildlife out there in the canals – all kinds of birds, otters, alligators, and deer. Sometimes when you fish in the canals of the Delta National Wildlife Refuge, there will be thousands of waterfowl all around you.

There are no boats for rent at the Venice Marina, but there is slip space for rent, fuel and other services. A launch ramp is nearby.

A parking area for recreational vehicles, with water and electrical hookups, adjoins the marina parking lot.