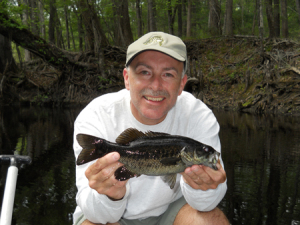 Although spring and summer are baseball season for many Americans to whom a grand slam is that glorious occasion of hitting a home run with the bases loaded, many will marvel more at Walker’s stunning and fun accomplishment. Even though baseball is often touted as America’s national sport, many times more Americans fish than play baseball. (Seventeen percent of Americans age 6 or older fish, whereas 5 percent play baseball, according to the Outdoor Recreation Foundation 2010 Participation Report.) Instead of connecting the bat to the ball, anglers enjoy the healthy benefits of connecting with nature through a taut fishing line.
“I was inspired by an article in Bassmaster magazine and made it my 2011 New Year’s resolution to catch all the Florida black bass species this year,” Walker said. Florida has four of the nine black bass species that make up the BASS Slam (BassMaster.com/Slam). Collectively, bass are the most popular sport fishes in North America. The Florida largemouth is the largest and most popular of all, but its smaller cousins provide great fishing as well. Completing the slam requires a commitment to travel, careful research and a high level of skill.

Because of the immense popularity of black bass and their potential to contribute to the ecological, economic and social well-being of Florida, the Florida Fish and Wildlife Conservation Commission (FWC) on June 9 approved a long-term management plan (see MyFWC.com/Fishing) to ensure anglers worldwide will recognize Florida as the undisputed bass fishing capital of the world. Among the many action items in the new plan is the idea of supporting the BASS Slam and emphasizing the Florida black bass species as a possible Florida grand slam, which can inspire anglers to seek out new opportunities and emphasize the critical need for habitat management and conservation to keep these fisheries viable.

Walker’s story epitomizes all that the FWC hopes to encourage in anglers. His quest began April 2 with a trip to Oleno State Park on the Santa Fe River, accompanied by his wife, Nancy, and their 4-year-old son, Jack. While fishing there in a rented canoe, he caught both a Suwannee bass, with its beautiful purplish colors along the lateral line, and a Florida largemouth.

Walker next took on the shoal bass. After researching the species on MyFWC.com/Fishing and elsewhere, he decided that the upper Chipola was the best place to go. He loaded his family and took them to Florida Caverns State Park. On the way, he tried fishing from shore and was rewarded with a beautiful shoal bass from the Chipola near County Road 278 (Peacock Bridge Road). He described this as his favorite catch, as it slammed a finesse worm and came 2 feet out of the water, giving them all a thrill. It is also a beautiful fish, with tiger stripes along its cheeks, an orange tint and bright red eyes. By the end of April, he had three of the four Florida black basses to his credit.

Needing only the spotted bass, and wanting the best (most current) information available, he contacted the FWC. I had the good fortune of taking his call and enjoying a delightful conversation with this avid angler, conservationist and family man. Enthralled by his story, I put him in touch with one of our regional offices, where Katie Woodside and Matt Wegener provided him with the information he needed.
In his words, “Some great folks there shared with me great (and beautiful) locations to find my last species. This trip actually began on my birthday (May 26) and resulted with the accomplishment of my Florida black bass grand slam.”

He caught a qualifying spotted bass at the Hightower Springs Landing on Holmes Creek, just by walking the bank with his family and casting a finesse worm.

It must have been a memorable birthday and Memorial Day weekend for him and his family.
Jim grew up primarily doing saltwater fishing around Daytona with his father, and now participates in local bass tournaments. He wants to pass that legacy of connecting with nature and caring about our resources to his son, who is already well on his way to being a good steward. Jack is the designated “release man” for the Walkers. He loves to help get their catches back into the water and see them swim off. They have also taken a family trip to visit the Florida Bass Conservation Center in Sumter County. At this working FWC fish hatchery, they observed public displays highlighting the role of hatcheries and conservation in sustaining quality bass fisheries, and depicting both trophy Florida bass and the other black bass species and their ranges.

That sounds like enough to make a great story and cover a half-year of fishing, but the Walkers had more to offer. Nancy, Jim’s wife, is one fish shy of her Florida slam as well. Moreover, along the way, they went one better. On an earlier fishing trip in February, they visited south Florida and, fishing from shore, caught a peacock bass. Peacock bass are the only reproducing nonnative fish stocked by the state in the early 1980s to help control other small nonnative fishes that escaped or were illegally released from aquarists or the aquaculture industry and to provide a high quality sport fishery. Unlike the black bass that are part of the sunfish family, which includes bream and crappie, peacock bass are cichlids like tilapia and oscar.
Florida freshwater fisheries also offer striped bass, white bass and the sunshine bass (a hatchery-produced hybrid of the other two). These are from a third family of fishes known as the temperate bass. Again, they are not part of the black bass slam, but are on the Walkers’ wish list, along with the other five black bass species that are found elsewhere in North America. Somehow, I expect someday to hear that they have expanded their fishing horizons to include them all.

Alker said, “The coolest thing is that I not only accomplished our Florida black bass grand slam, but did it in half the year and for the most part just walked the bank. This quest has shown me so many new and beautiful places that I would have never known existed. You hear a lot about our (Florida’s) fantastic saltwater fishing and largemouth bass fishing in the bigger lakes, but the areas I was fortunate to find and visit while completing this slam in the central and Panhandle portions of our state are absolutely beautiful.”
In 2011, over 1.5 million fans flocked to Florida to watch professional baseball, hoping to see a grand slam. Meanwhile, nearly 2.8 million anglers fish in Florida each year and like the Walkers have the opportunity every day to enjoy the sound and feel of a bass striking their lure and exploding from the water. Oh yeah, give me a Florida black bass grand slam any day. That is my kind of four-bagger.