How to Get Started With Freshwater Fishing – The Beginners Guide 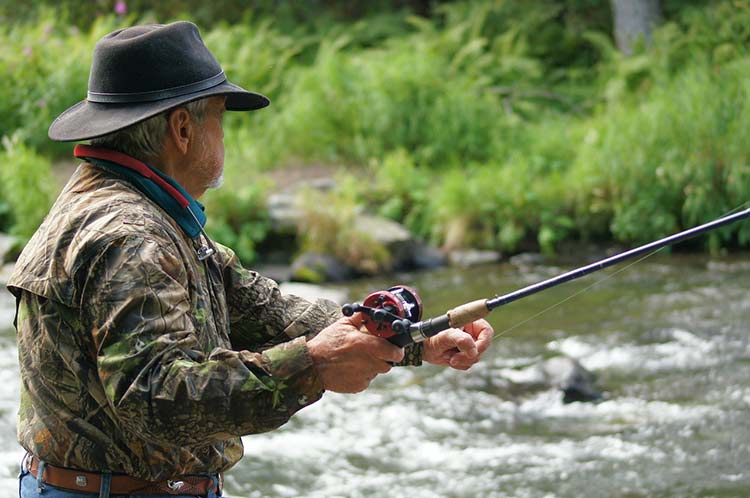 “There’s a fine line between fishing and just standing on the shore like an idiot.”

If you are newly inspired to take up the sport of fishing, be aware of the basic tenets that lead to a fish in the hand, rather than someone just watching the grass grow or gazing at the size of your feet.

First, think of yourself as a fish—a being that depends on fins instead of feet, a very small mouth, and a genetic instinct with which to survive.

Then think about water, its characteristics, its force, its seasons and its origins.

All the details about fishing gear, fishing lines, lures, flies, sinkers, leaders, knots, fishing waders, inflatable fishing boats or float tubes and apparel can be learned by reading sport-fishing articles and querying your local outdoor store clerk or friends who are experienced anglers.

Alternatively, simply read on to find some of these details later in this article, while noting that the best practice field for fishing exists in freshwater lakes or streams. We therefore restrict this session of Fishing 101 to the freshwater variety of fishing.

Lesson 1: Be the Fish

You must understand a little bit about fish to know where best to catch them. Like we humans, they must eat and they must move around in order to eat.

You must also know which species of fish you wish to catch because that determines what kind of food they normally eat.

Most spring-fed lakes consist of crustaceans (i.e., shrimp, crawdads), smaller fish (minnows), insects that are born on top and at the bottom of a lake, as well as amphibians—small frogs, waterdogs and the like.

Depending on the size of the fish you seek and its mouth (small, teethy, large, toothless), any of these creatures can become its prey.

Some of these creatures inhabit the cooler currents in a lake, as in the mouth of one of its feeder springs, such as crawdads. Some thrive in shallows, including crawdads, waterdogs and tiny minnows. Others dwell in the deep, such as shrimp and some larger minnows.

Put on some polarized sunglasses and observe the shallows to notice which fish you see there in the early morning or at dusk. Deduce which ones are not in the shallows. This will give you an idea of whether the fish you seek must be sought in deep or shallow water.

Meanwhile, note that all fish will most likely seek a bit deeper water as the sun rises higher in the sky. Also note that fish almost always flee when they see a moving shadow (read: human) in the shallows.

As for streams, look at fish as the pot-belly angler who shuns workouts at the gym in favor of sitting on the bank or in a boat fishing.

Like us, fish prefer to not overextend themselves physically, but for a different reason than laziness. They must preserve their strength to either migrate to the ocean in the case of anadromous fish, or to chase their prey should they be a landlocked fish.

Every ounce of energy counts. This is why you see fingerling salmon swimming backwards on their way out to sea—their heads upstream in the direction from which they were born. They need their reserves to fend off marine predators in the ocean and resist disease.

They therefore let the current take them to the mouth of the river while their ready mouths remain pointed upstream to consume microorganisms served to them by the current—the mother feeding the baby.