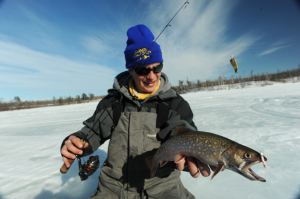 How many times has a guide, pro, or fishing buddy advised we think “outside the box” when choosing a bait? Seriously, if we had a dollar for every instance, we’d probably be boat shopping.

Still, there’s a lot of truth to the over-used adage. Going rogue, novel or off-the-wall is often just the thing to fool finicky fish. And it’s not just about choosing the overlooked lures. Sometimes it’s about pairing two classic baits for a double-dose offering that presents even more pizzazz. Where legal, of course … Check your state regs, kids.

With that said, let us introduce you to Grant Prokop, an ice-fishing guide from Grand Rapids, Minnesota, who fishes some of that state’s most remote northern lakes, some of which are fantastic trout waters. Poke around and you’ll find lakes with brookies, a few with browns, and still others with rainbows, splake, lakers …

Now if you’ve ever fished for trout, you know aquatic insects and crustaceans are their main forage (with the exception of lake trout, of course). Yes, even the most goliath-size fish are gobbling up tiny tidbits that waft through the water column; thus, the efficacy of small jigs.
But grabbing the attention of trout, which are ever on the move, can seem a daunting task with nothing more than a morsel tied on you line. A better way is to use an attractor and a small jig.

Prokop’s a master of this one-two punch. In this video he explains how pairing the attention-snatching Custom Jigs & Spins Pro Series Slender Spoon combined with the slow fall of a Shrimpo.
“It’s the flash and flutter of the Pro Series Slender Spoon that gets noticed,” says Prokop. And then there’s that slow fall of the Shrimpo, which imitates one of the trout’s most sought-after fare to a tee. To put it simply, it’s a deadly combination that catches fish.”

As you watch the video, study Prokop’s jigging cadence, and consider other viable dropper pairings like Custom Jigs & Spins’ Ratso and Rat Finkee, or a Chekai.