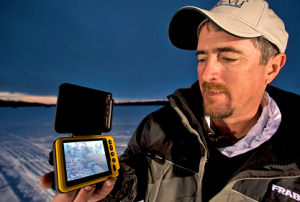 The two-day hardwater showdown, held December 14 and 15, 2012 on the southeastern bays of Mille Lacs, Minnesota, hosted a field of 81 qualifying teams from 14 states and Canada.
In the past decade, inspired by the schemes of ice fishing pioneers such as Brian “Bro” Brosdahl, serious anglers have gone vertical with their Aqua-Vu underwater cameras. “Down-viewing” describes the practice of aiming the camera lens vertically to spy on fish and the terrain from a bird’s-eye view. It’s also a dynamic means of watching wary fish react to presented ice lures.

But there’s a drawback to down- and side-viewing: Fish lurking in vegetation or over dark-colored lake floors blend in so well that they often become impossible to discern on screen.
While prefishing the Championship, eventual fourth-place finisher Shawn Bjonfald devised a radical fish finding solution with his Aqua-Vu Micro Plus DVR—a progressive palm-sized camera he’d been testing in his role as art director for North American Fisherman magazine.

“This past fall, we used Humminbird side-imaging sonar in our boats to uncover the best weedbeds on vast open flats,” Bjonfald reported. “We entered GPS waypoints on each key zone, and then went back during prefishing with Aqua-Vu cameras to find big ‘gills and crappies living in the vegetation.

“We found that the biggest fish were buried in the greenery and tough to spot when viewing with the camera pointing horizontally or while down-viewing. The fish blended into the vegetation and dark-colored bottom, and you couldn’t see them.”

Bjonfald then made the critical connection. “I realized that if we could down-view, why couldn’t we do the same thing in reverse—‘up-view’— and silhouette hidden fish against the white underside of the ice?”

Bjonfald noted that his Aqua-Vu Micro Plus DVR camera contains an adjustable housing that allows the user to tilt the lens in any direction, including straight down, horizontal or even back up toward the surface.

“When I rigged the Micro camera to point upward at roughly a 75-degree angle,” he observed, “fish started popping out at me on the screen. It was remarkable—instead of dark shapes and a mass of vegetation, I was now able to see big crappies and sunfish sharply silhouetted against the light underside of the ice. There’s no doubt that the ‘up viewing’ strategy helped uncover our best tournament spots.”

From there, Bjonfald’s comrades— the top finishing team of Brandon Newbie and Ryan Wilson, as well as the third-place team of Kevin Fassbind and Nick Smyers— let their presentations do the talking. On day two, despite a coldfront, Newbie and Wilson extended their lead, extracting another limit of 8 crappies and 8 perch for 11.31-pounds and a two-day total of 24.83-pounds, outweighing the field by over six pounds of panfish.

Eventual winner of the Humminbird Big Fish Award, Bjonfald iced a 1.92-pound trophy crappie on day two, confirming the big fish appeal of his underwater hotspots, and certainly cementing ‘up-viewing’ as one of the season’s biggest breakthroughs.