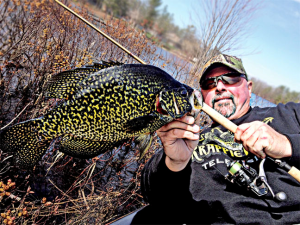 Knight him, or rather…‘King’ him. The wearer of this crown of panfish is none other than the Krappie King himself, Karl Kalonka. (Right there are more k’s than the average man utters in a day.) Began as a factual, fast-paced television program aimed at educating in an entertaining fashion, Krappie Kings has evolved into a tip-to-tail assortment of crappie-specific gear.

When Kalonka first embarked on the project he had two principles in mind: price and quality. Panfish, the second largest segment of freshwater fishing in North America (only bested by bass), attracts an incredibly diverse field of anglers. With that in mind, Kalonka first considered price. “Krappie Kings products are stickered with the price conscience angler in mind. I didn’t want price to be a stopper.”

Part and parcel to affordability, Kalonka also demanded products he’d hang his hat and reputation on. “You only get one chance to do it right. Once it’s out there you can’t take it back. And I’m more than pleased about how everything turned out.”

Kalonka says Krappie Kings products run the table of crappie fishing techniques, too, from vertical jigging to long-line trolling, spider rigging, and shootin` docks and casting corks. North, south, east or west, there are Krappie King selections made for the way you fish.