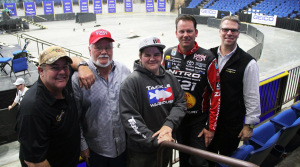 The unassuming Sam Reynolds describes himself as “a guy who never wins anything.” But all that changed on the evening of Sunday, March 6th at the final day weigh-in of the 2016 Bassmaster Classic in Tulsa, Oklahoma.

The 66-year-old Sanger, Texas native won a big prize … and it wasn’t an electric leg lamp.

Most recently, that meant chaperoning 16-year-old son Teddy and teammates to the biggest event in bass fishing, the 2016 Bassmaster Classic. Little did he know that as he and his group filed down the stairs into Tulsa’s BOK Center destiny was indeed unfolding.

Randomly sitting in a seat emblazoned with Humminbird’s logo underneath, Reynolds had no idea that this was his day in the limelight. To him, it was simply a good spot to enjoy the final weigh-in. “I sat in that same seat during the second day weigh-in. The kids gave me the spot so I had the end,” laughs Reynolds.

The emcees then directed everyone in the stadium to look under their seats. Seconds later Reynolds yelled “I won, I can’t believe it” and the arena spotlights lit up his seat in the crowd, K1 of Section 121.

“My buddy saw the whole thing live online. Funny thing, he was supposed to take the boys, but had a tournament, so I volunteered. His wife said he started hollering and cheering when I stood up,” says Reynolds.

Anglers Inn owner Billy Chapman Jr. remarks, “I’m honored to part of this promotion with Humminbird, and I am looking forward to showing Sam and Teddy the dream fishing trip of a lifetime! They will have the opportunity to catch and break their new personal best bass numerous times during their stay at my resort – and on video for the world to see!”

Turns out Reynolds is a Humminbird user but of more simple roots, with two compact Humminbird 386 units installed on his bass boat. “I was looking really hard at upgrading to the HELIX 7 SI GPS with a little income tax money. I did not expect this,” says Reynolds.

Not only will Reynolds and his son get the chance to catch the bass of a lifetime over five days at Anglers Inn, they’ll also help map the greatest big bass lake in the world with Humminbird’s AutoChart Live, which comes standard on HELIX 9, 10 and 12 CHIRP units. Plus, Reynolds also receives a Humminbird HELIX 10 SI GPS KVD edition to upgrade his own boat.

The story only gets better. While the last few spectators trickled out of the BOK Center Reynolds also met 4-time Bassmaster Classic champion Kevin VanDam, who walked over to personally congratulate the father and son, as well provide a few fishing tips for his upcoming trip to famed Anglers Inn on Lake El Salto, Mexico.

“Not only did I win, I got to meet one of my favorite pros! I wanted KVD’s autograph earlier on but the lines were too long. Didn’t figure I’d meet him and get to talk to him for so long. He gave me some good advice, like deep diving crankbaits for the giant bass and topwaters in the morning. I really enjoyed talking with him.”

Reynolds adds: “It was an exciting day. Tell you what, I didn’t get one bit sleepy driving home!”

Humminbird will be sending two more lucky anglers and one guest each to Billy Chapman Jr.’s Anglers Inn International at Lake El Salto, Mexico! Not only will the winners have a shot at the bass of a lifetime, each will get the chance to explore and map the El Salto using Humminbird® AutoChart® Live.

Entering is simple: Visit Humminbird’s Facebook page, click on the “El Salto Revealed” button, fill out your info, take a simple quiz, and hit ENTER! YOU could WIN the dream fishing trip of a lifetime! But don’t hesitate – the contest ends on 12:00 midnight (PST), May 31st, 2016. Winner will be chosen randomly on June 1st, 2016, and notified via Facebook.