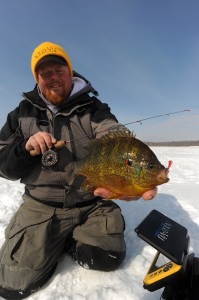 Early each fall, a close-knit group of North American Ice Fishing Circuit (NAIFC) anglers—Kevin Fassbind, Nick Smyers, Brandon Newby, Ryan Wilson, and Shawn Bjonfald— already know where they’ll be fishing when first ice forms. For the dynamic cadre hard water competitors, ice fishing never really ends. So even when fishing from boats, the Wisconsin based posse uses the time to scout panfish spots on upcoming tournament venues. Running vast lake sections with side imaging and zooming in with underwater cameras provide the anglers with amazing sneak-peaks at the fish location, even within a big body of water.

At the December 2012 NAIFC Championship on Mille Lacs the comrades took three of the top four positions, including 1st, 3rd and 4th. Bjonfald won big fish honors with 2-pound crappie. The key to the anglers’ collective success was taking an extra day in late October to probe literally hundreds of acres of shallow flats, less than 15 feet, in a boat armed with side imaging and a Lakemaster digital lakemap. Anytime the anglers discerned something different—a clump of thicker pondweed, a dense mixture of pondweed and coontail, or a clear spot surrounded by heavy vegetation, they dropped a waypoint.

During December pre-fishing on ice, the teams checked each pre-determined spot with an Aqua-Vu Micro camera. When the first day of the event arrived, each angler already understood what every spot looked like and knew the exact location of the biggest crappies and bluegills. During the 2013 and 2014 tournament seasons, the strategy and success repeated itself. For the past two seasons, Newby-Wilson and Fassbind-Smyers have finished #1 and #2 in the Team of the Year standings.

Discovery Details
At most of these NAIFC events, the crew employed similar pre-ice scouting methods to unearth tournament sweet spots. “In the boat, we can cover a whole lake in less than a day,” says Bjonfald. “Coupling Lakemaster maps with side imaging and an Aqua-Vu Micro, we can identify every piece of unique structure in the lake—weedbeds, cribs, rockpiles, and other subtle spots. Before launching, though, we’ll spend days gathering intel. We tap every possible resource—DNR lake maps, satellite imagery, Google maps, and precise Lakemaster contours—to expose all those subtle, often overlooked goldmines.”

In addition, Bjonfald notes that he’ll employ something called the ‘bug-out bag’ system. Waypoints are entered into a boat-mounted Humminbird 597 unit, which can be instantly detached from the console and snapped back into a portable ice shuttle for use on hard water. “By using the same unit, open water, and ice, we can reference the exact waypoints we discovered prior to freezing up, and even see where the boat’s plotlines are most dense, indicating areas of activity. Between late fall and early winter, panfish locations in some lakes don’t change much. It’s a key detail that has helped us unearth some of our ultimate big fish spots.”

Checking Crappie Cribs
Among Bjonfald’s more intriguing findings are artificial cribs, which can be a conglomeration of cobbled-together logs, wood pallets, brush piles, root balls, and old tires. Bjonfald says the best cribs aren’t necessarily the biggest ones, but rather the structures stuffed with the most brush, branches and other canopy-creating covers. Isolated cribs can be even better than colonies of cribs if they’re associated with a drop-off, weedbed or a rockpile. He also adds that larger panfish favor the corners and edges of the cribs, while smaller fish often get pushed to the top and outsides of the edifice.

“The best cribs create a sort of micro food chain,” he says. “Panfish feed on the small crustaceans and invertebrates that cling to or hide in the crib. Often, bass, walleyes, and muskies patrol the perimeters. You’ve got to go in with a Micro cam and probe every opening to identify the golden spots; see how to approach each one and where, exactly, to drop your lure.”

Micro Mobility
While Bjonfald scouts during soft-water, Brandon Newby and Ryan Wilson burn hundreds of calories during the ice tournament itself. Wielding specially adapted Milwaukee portable hand-drills with 4- or 6-inch augers, the topflight team incises hundreds of ‘gill sized holes per day, always spying on the underwater landscape with an Aqua-Vu Micro cam.
Last winter, Wilson and Newby designed a new viewing/transport system, a portable underwater camera case that greatly eases underwater study. Working closely with the two anglers, Aqua-Vu created the Pro Viewing Case, which allows anglers to essentially “wear” their camera on their chest while they move from hole to hole. The customized soft container frees up hands and positions the LCD screen in the direct line of sight, for easy viewing, while a built-in sunscreen and cable pouch add further convenience and functionality.

“The Mobile Viewing Case has been a huge part of our success,” says Newby. “It keeps the Micro cam screen handy and in plain view at all times. It also allows us to fish, drill holes or tie-knots, all while underwater viewing, hands-free. The mini drill and Micro Case system also helps Ryan and I scout with stealth, so we can keep our good spots hidden from competitors. Sometimes, though, when teams are really pushing in on our turf, we’ll use misdirection and a little subterfuge to put them off the scent. Like your golden spots, some secrets you simply take to the grave, man.”