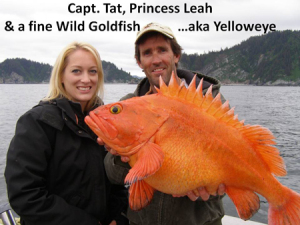 The morning started out with a bang as we had already boated over a half-dozen king salmon while trolling just offshore Montague Island in Alaska. Satisfied with their salmon fix, the charter clients opted to switch gears and head out for some bottomfish, namely halibut. Since it was still June and lingcod were off-limits in our area, our “Combo” trip today would hopefully include Kings, Halibut and whatever flavor of rockfish the ocean wanted to give up this day.
As often occurs during the moon’s mid-cycle, the tides were weak and very little water was moving on our halibut grounds. Even though we were in the middle of the incoming tide, there was only a half a knot of water flowing under the boat and this made it tough to spread our scent even with what seemed the majority of the left-over’s from yesterday’s fish cleaning table dangling 180 feet down at the bottom of the sea.

We had scratched out a few chickens and turkeys (10-40 pound halibut) but the bite was slow and nothing big seemed to be happening. We were on a small rockpile seven or eight miles off the southwest tip of the Island wherein weeks past the bite had been spectacular and big fish a plenty. However, since the tides, and subsequent currents, seem to dictate success when halibut fishing, it was time to make a move before I lost the clients to either boredom or the six-foot swell (and we were already on third-string jokes so it would probably be the swell that won).
We pulled anchor and moved a bit west to a much more substantial pinnacle known to house a variety of colorful specimens. As the boat straightened the anchor line once again we gave the go-ahead to anglers waiting with today’s selection of jigs and baits. Before they even hit the bottom we had a couple of fish on and after a few short bursts of energy, the force at the other end of the line began to fade… typical yelloweye.

Within fifteen minutes we had six specimens aboard and were already halfway to our limit of two each. Within the waters deemed the “North Gulf Coast” by the Alaska Department of Fish and Game and outside of Resurrection Bay the non-pelagic rockfish (all rockfish that live in a certain location their entire life) the daily limit is one. However, heading east and crossing the line (Cape Fairfield) into “Prince William Sound” (PWS) waters, the limit doubles to two.
This is where, as a charter captain, I have a little difficulty with the liberal limit. If we were to take 12 yelloweye each day out of these waters (or 24 to 30 depending upon the size of the charter boat) I think there would be a problem. Many charter captains do recommend to their clients that they harvest only one non-pelagic rockfish while in PWS waters, and this is part of what keeps the population healthy.
The problem is that rockfish have a gas-filled organ called the swim bladder which allows the fish to control its buoyancy. When rockfish are brought to the surface quickly, the swim bladder can over-expand and burst. The expanding gas from the swim bladder can push the stomach out of its mouth and even shove the intestine out the other end.

Therefore, the only real way to prevent unwanted mortality is to not hook the fish. In Alaska we’re lucky; there is usually plenty of other fish around for people who’d like to fill their freezer. If it’s meat you want, catch what you need and move on to the next species. The pelagic (roaming) rockfish populations are relatively prolific and inhabit just about the entire coastline of the state.
According to the Alaska Department of Fish and Game (ADFG), there are 34 species in the genus “Sebastes” which live in the Gulf of Alaska, and about a dozen or so are taken in the sport fishery. These rockfish are typically divided into three groups, or assemblages, based on habitat preferences and biological characteristics:
Pelagic Shelf: these species are usually found in large schools up in the water column, above or near rocky areas on the continental shelf. There are five species in this group, but only three, the Black, Dusky, and Yellowtail Rockfish, are common in the northern Gulf of Alaska. They are generally not as long-lived as other assemblages. Most pelagic rockfish taken in the sport fishery is 5-30 years old.

Demersal Shelf: these species are generally found in close association with the bottom in rocky areas of the continental shelf, where they often set up defined territories. This group includes Yelloweye, Quillback, Copper, Tiger, and China Rockfish, among others. Many demersal species can live in excess of 50 or more years. Yelloweye rockfish in excess of 100 years of age have been harvested in the sport fishery.
Slope: these species are also found closely associated with the bottom, but generally in deeper waters of the continental shelf or on the continental slope. Silvergray, Rougheye, and Shortraker are the most commonly caught species in this assemblage, but generally, make up a small proportion of the sport harvest. These species are all long-lived, with some exceeding 150 years of age.
Although there are actually five species of pelagic rockfish in Alaska, the most popular is, of course, the Black Rockfish or “Black Bass” as they are erroneously called by many. Because of their proximity to many of Alaska’s popular seaports, Black Rockfish is the only one of the five species that have a targeted or directed fishery and thus a real population concern.

The daily bag limits in the Alaska Peninsula and Kodiak areas, where the harvest is relatively small and dominated by pelagic species, is usually the highest in Alaska. In the more heavily fished waters of the Cook Inlet-Resurrection Bay (North Gulf Coast) area, the daily limit is normally a bit lower but still relatively liberal. In Prince William Sound, where demersal species make up the majority of the harvest, the bag limit is generally about the same as the Gulf Coast.
Fortunately, the vast majority of Alaska’s rockfish live in the rugged, un-trawlable near coastal areas of our state. Had they been more susceptible to living further offshore, we would surely have a bigger problem keeping them out of the commercial nets. Although over 3,000 metric tons of Pelagic Rockfish was allocated to commercial harvest by NOAA’s Central Gulf Coast Pilot Program in 2007, it is estimated that the quota wasn’t achieved, and hasn’t been since.
This means that the chief concern among biologists and fishery managers is the sport/recreational fishery and again, mainly concerns those fish populations within reach of the popular seaports along the coast. There are a few steps anglers can take in order to prevent overfishing and/or high mortality.

According to a study sponsored by the National Sea Grant College Program of the U.S. Department of Commerce’s National Oceanic and Atmospheric Administration (NOAA), avoiding rockfish you cannot keep is the best option when fishing in water deep enough (60 feet or more) to cause swim bladder problems. If you start to catch rockfish that have to be released, the best choice is to move.
On rockfish that you can target, do not “high grade” (release smaller fish so you can keep larger fish) fish caught in water over 60 feet deep. One trick is to use larger hooks and baits to discourage smaller fish. Catch-and-release fishing is not a good option in deepwater fishing for fish with well-developed swim bladders. Remember the magic number is “60”, don’t release fish caught deeper than this.
ADFG personnel have been conducting research on the effectiveness of devices which allow rockfish to be released at depth. Preliminary results have shown promise for increased short term survival. However, further research is required in order to examine long term survival. Anglers are encouraged to avoid rockfish habitat when fishing for other species and to keep baited lures off of the ocean floor. In Prince William Sound and Southeast Alaska anglers must retain all non-pelagic rockfish caught until the bag limit is reached.
Non-pelagic rockfish, including Yelloweye, are extremely vulnerable to overfishing. While yelloweye rockfish stocks are considered healthy in Alaskan waters, careful management is needed to protect the sustainability of yelloweye for the future. Nationally, Yelloweye rockfish on the west coast were declared overfished by the National Marine Fisheries Service in 2002, and are currently under a rebuilding program.
Some areas of the West Coast have experienced dramatic declines in yelloweye populations. In April of 2010, yelloweye in the Puget Sound/Georgia Basin were listed as a threatened under the Endangered Species Act. These declines in yelloweye populations were largely attributed to overfishing… let’s not let that happen in Alaska.

Capt. T.A. “Tat” Tatterson has over 25 years of experience fishing all across the Pacific and operates PFISH “Pacific Fishing Inc” a charter business with operations in Seward, Alaska, Baja California, Mexico and Panama. He can be reached via email at pfishnet2000@yahoo.com or via his website: www.pacificfishing.us