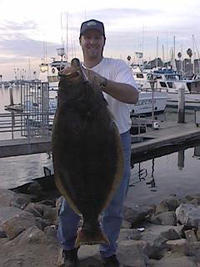 Fishing for Halibut is a little bit different around San Francisco. There, the sun beats down on bared flesh, and cold beer is the order of the day. There, indisputably, it is summer.

Just off Muir Beach (7.0 miles north of San Francisco) — both the air and the water are gelid and murky. Hot tea and woolen sweaters are the appropriate ancillaries. Upwelling fog is keeping conditions cold.

Yet the anglers out in fishing charter boats are undismayed by this grim coastal weather. They have one thing on their minds and one thing only: halibut. Forty feet below their boats, California halibut ranging up to 30 pounds lie in the sand and silt, waiting for anchovies to pass within range of their toothy jaws.

Anglers do their best to accommodate the halibut — they yearn for mortal combat (mortal for the fish, anyway). The skipper places his boat near some offshore rocks on the north end of the beach and cuts the engine.

Drifting for halibut
As the boats laze south along the beach, fishermen bounce nose-hooked live anchovies off the bottom.The charter boat drifts several hundred yards, after which the skipper starts the engine, motors back to the rocks, and repeats the process.

Each drift takes about 20 minutes and results in at least one hook-up with something big, flat and slimy.

Halibut might be the ugliest fish on the North Coast. When they come up from the bottom, they look like carpets that have seen years of abuse from cigarette butts, spilled coffee cups, and retching cats. They have dorsal surfaces that are mottled in various dismal shades of gray and brown, and their ventral sides are as white as curdled milk.

They differ in their fighting strategies from most game fish, inasmuch as they don’t struggle inordinately in the water; they wait until they’re brought onto the deck of the boat. Then they gyrate around like giant flapjacks suddenly imbued with crazed sentience.

In Alaska, large Pacific halibut — those weighing in excess of 200 pounds — have been known to break the arms and legs of the naive fishermen who bring them aboard without subduing them first. Way up north, such persuasion is usually accomplished with a pistol; for smaller halibut in California, a simple bludgeon will do.

What halibut have going for them isn’t beauty or their fighting at the end of a line — it’s their size and succulence. No offshore California fish is better eating.

The late spring and summer are potluck season. It is when halibut, striped bass and salmon congregate in and around the Bay to gorge on teeming schools of anchovies. Yet while halibut are plentiful at this time of year in local waters, catching them is not necessarily an easy task. It pays to enlist a boat skipper familiar with the wiles of the species.

Great care must be paid to the bait. While halibut are occasionally caught on dead anchovies or cut bait, they respond best to live fish, the friskier the better. During the course of drifts at Muir Beach, anglers are urged to change anchovies often.

Halibut are hard to hook
Then comes the matter of the bite. Halibut are difficult to hook. They don’t hit hard like a striped bass. You usually feel a series of tugs, and then a long pull — almost like a snag. That’s the time to set the hook, but don’t do it too hard. The limit is five fish a day.Halibut recipes
Here are a couple of recipe ideas for this funny-looking flatfish with a snowy white underbelly that put up a pretty good fight at the end of a fishing rod.

These two recipes are refreshingly different and quite appealing. Baihian halibut is marinated in lime juice and then simmered in coconut milk. Garlic, chili and bell peppers, onion and a bit of tomato add punch.

Five-spice powder and fresh ginger liven up the other halibut recipe that is served over a bed of warm broccoli slaw. This flavorful and colorful dish is a feast for the eye and the palate and is easy to prepare.

Even if you’re not a fisherman with a freezer full of halibut, try either one of these recipes for this delicious and mild, firm-fleshed fish; you may just book yourself a trip to California and drop your own line into the ocean.