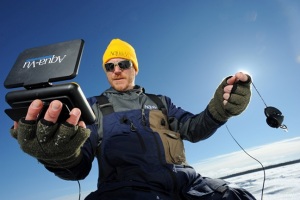 To make an accurate comparison of the achievements of a certain distinguished team of competitive ice anglers, you’d need to enter the rarified air of one “KVD.” For the second year in a row, Team Aqua-Vu members Brandon Newby and Ryan Wilson dominated the highly competitive North American Ice Fishing Circuit (NAIFC), winning multiple qualifying events as well as capturing Team of the Year.

Not to be overlooked were the on-ice performances of fellow Aqua-Vu gamers, Kevin Fassbind and Nick Smyers, who once again finished second, mere inches behind their teammates.

On their way to the title, Wisconsin anglers Newby and Wilson won two of seven Tournament Series Qualifiers, including a dominating performance at Lake Maxinkuckee, Indiana and another impressive victory at Michigan’s Croton Dam Pond.

As early as 2009, Team Aqua-Vu showed signs of impressive things to come. Newby and Wilson finished in 6th place that year, and again in 2010. They edged into 3rd position in the 2011 standings and finished 4th in 2012. So, no one was surprised when the pair walked away with the Team of the Year title in 2013, and again this year. Add to their resume a NAIFC Championship title in 2012, and you begin to understand the comparisons to bass fishing’s most celebrated competitive angler.

Mirroring KVD’s power fishing prowess on frozen lake surfaces, Newby / Wilson and Fassbind / Smyers display staggering energy on the ice. Wielding specialized power drills and Aqua-Vu Micro underwater cameras, the anglers tear through vast expanses of hardwater real estate— all in the name of finding untapped pockets of heavyweight crappies, sunfish and perch.
“At the Lake Maxinkuckee tournament, Ryan and I drilled 1,200 to 1,300 holes in prefishing,” said Newby. “We never wet a line, which is our usual prefish routine. Instead, one guy drills holes and the other scopes for fish with the Aqua-Vu.”

Newby reported that lakeshore property owners had previously treated the lake for vegetation, virtually eliminating the classic panfish cover from the equation. “Weeds were virtually non-existent in the lake, and the one isolated area that did have vegetation quickly became overrun with other anglers,” he said.

“Our approach in tournaments is all or nothing—to hit it out of the park and go for the win, rather than sharing a community spot and hoping for a top-ten. At Maxinkuckee, we wanted to find and fish our own spot,” Newby continued. But as has often happened in recent events, once he and his partner found the area that held fish, they enjoyed no more than an hour of fishing before other teams moved in on their location.

With nearly 2,000 acres of water to explore, the anglers set out for Maxinkuckee’s deeper midlake basin. Wielding a Milwaukee M28 hand drill armed with a lightweight, 4-inch composite auger, the anglers chewed a mountain of ice, dipping the miniature underwater camera into each hole. A vast majority of holes turned up nothing but empty water. But finally, they landed on and spied the mother lode in a 26-foot section of the lake’s soft-bottomed basin.

“Unlike other cameras, the Aqua-Vu Micro allows us to ‘up-view,’ pointing the lens up toward the underside of the ice. It’s a tremendous fish-finding strategy, and has been one of our real secrets to success. Up-viewing lets us scout spots much faster, and shows us a larger area of underwater real estate.”

Newby added that another of their prefish routines is to use the camera’s DVR function to record footage, which they study more closely once off the ice. “The Aqua-Vu is easy to connect to a laptop computer, so we can view underwater footage on a bigger screen. It shows us lots of little details we might not notice while we’re on the lake.”

The strategy paid off at the 2012 NAIFC Championship, as the anglers reviewed footage recorded in dense vegetation, which revealed big hidden panfish buried in individual cabbage beds. They also used the camera to sight-fish at that event, down-viewing into the shallow vegetation.

While reviewing footage the night before the Maxinkuckee tournament, Newby and Wilson discovered that one of their holes—which had been saved on GPS—contained many more panfish, including some big crappies, than they had originally observed.

Bee-lining for the spot on tournament day, the anglers iced a rapid succession of sizeable panfish, including eight bluegills and seven crappies (no other team caught a single crappie during the tournament.) Their weight also included Big Fish of the event, a 1.27-pound slab. All panfish fell to 4- and 5-mm Kodiak tungsten jigs tipped with two lively spikes (larvae.)

By the time other competitors converged on the isolated hot spot, the ballgame was already over. Newby and Wilson weighed 10.13-pounds of panfish toward a dominating victory.

Following another big win at Croton Dam Pond, a sixth-place finish at Chisago Lake, Minnesota and a respectable 15th at Lake Menomin, Wisconsin, Newby and Wilson had compiled 85 points, capturing their second consecutive Team of the Year title.

Once again, they gave props to their underwater cameras. “The Micro has changed the way we scout for spots on the ice. And in a tough bite, it’s indispensible for sight-fishing precious bites. Anyone who’s not using one of these stealth cameras in tournaments is at a serious disadvantage. Most of the top competitors now realize this. And eventually, we think use of this tool will trickle down to a majority of recreational anglers, as well.”

For now, comparisons to another famous power fisherman aside, Team Aqua-Vu is happy to relive a dominating season on ice.